Graceland is a Powerful Thriller 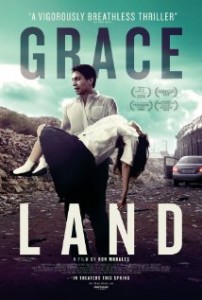 The modern crime thriller usually leaves something to be desired. It seems that in the race to deliver chills and thrills to the audience filmmakers today sacrifice taut narrative for complexity. This approach, though at times effective, neglects the fact that the real thrill comes from character, not plot. While it can be interesting to watch the web of schemes unfold, if you don’t care about the people involved in the twists and turns then what is the point? Some of the best works of crime and noir are deceptively simple; take Akira Kurosawa’s “Stray Dog” for example. Sure, his tale about a cop seeking his stolen gun takes a few twists and turns but it never sacrifices itself to unnecessarily complex maneuverings. Its power comes from its simplicity; it never fails to remember that while the stakes are high it’s the characters that matter.
In the same vein, “Graceland” manages to be both taut and engaging without relying on overly complex twists and turns. It is, truly, an entirely character driven piece of filmmaking that will keep you guessing and on edge until the very end.
“Graceland” follows impoverished limo driver Marlon Villar (played by Arnold Reyes). Marlon struggles in the depths of poverty, trying to raise his daughter while his wife languishes in the hospital awaiting an operation they cannot pay for. In an effort to make money for his family, Marlon will take any job his employer offers him including the taxiing of teenage prostitutes to and from the congressman’s lair. Though disgusted by his employer’s predilection towards young girls, Marlon sees no other option. Reyes gives a powerful performance of this conflicted soul, torn between his morality and his desire to support his family and save his wife’s life.
One day, while driving both his and his employer’s young daughters home from school, they are ambushed by a gang of kidnappers. The events quickly take a tragic turn when mistaken identity leads to the death of his boss’s daughter and the kidnappers take his own daughter. Now, Marlon is forced to play both sides. Knowing that the kidnappers expect ransom for a girl who is no longer living, Marlon must protect this information in order to ensure the release of his own daughter. Along the way we are taken deeper and deeper into the congressman’s pedophilia which may or may not play a role in the kidnapper’s scheme.
It’s a deceptively simple morality tale wrapped in the guise of thrilling revenge. I found myself rapt from the very beginning and curious as to where this film would take me. I do have to mention that there were some uncomfortable scenes involving the congressman’s terrible nature that might be a bit much for some viewers. I won’t go into too much detail but I will admit wondering if the actresses used were actually of age. There was nothing profane or vulgar about the scenes, let me be clear, but even assuming the actress was 18, she looked every bit the 13 the story wanted to show.
That wasn’t a complaint or meant to be detraction, mind you. Rather it’s an example of the raw, visceral nature of this film that explores the darkest, most twisted depths of the human soul. “Graceland” is a remarkable work that stayed with me for days after its screening.

Old Settler's Music Festival. SO LUCKY TO HAVE IT
Previous

A powerful performance by Matthew McConaughey
Next