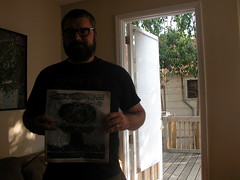 GRAHAM WILLIAMS: I think it’s a festival that definitely goes after a specific audience that likes progressive and underground music, so folks like my parents wouldn’t normally go–although they will go because it’s mine. But I do think there are a lot of people who haven’t gone and may not have heard of a lot of the bands that would love it because it’s a great time of year, the weather is perfect; it’s much more intimate setting than most festivals – you’re not a mile away from a band. It’s a very Austin festival—it’s cool, cutting edge music. It’s local vendors, local food and art. It’s pretty diverse and nothing typical that you would have heard a million times over. It’s fresh and new but a wide enough spectrum that you can pop around and still find something you would enjoy.

GW: There is a lot of parking.

AD: How would a local Austin band get involved? 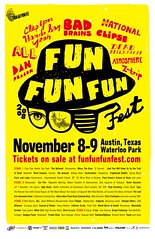 GW: I tell them to email or myspace me. I respond to everyone. We don’t have that much room of course. Most of the responses I’m unable to fill only because there are only so many slots on the festival

AD: How many bands this year?

AD: Have you ever taken a blind submission?

GW: Not for the festival but I have for many of the clubs where there is some random band that ends up being this amazing group. Bands get bigger later and get agents. I worked at Emo’s for ten years. I can’t think of how many times I booked bands that just had a demo tape and were just trying to get a show on tour. They all start out trying to get their name out there and get some gas money. Most of those bands end up breaking up, but every once in awhile one goes on to be the next big thing.

AD: Are you feeling the festival competition yet?

GW: A little bit but not really. The majority of the bands we book are not in the other fests. There is a little bit of crossover, like there are a few bands that I went after that are going to be on ACL and other festivals that were too close together, and of course I didn’t want to book them if they are playing in another festival. But I would say that was only 15%. ACL doesn’t do hip hop—maybe one—the Roots because they are safe and were on a Gap commercial. They put one hip hop act maybe and then punk is the same thing. Most of the indie bands we have only cross over a little bit.

AD: Does production cross over?

GW: We try to do everything in house as opposed to farming out to a big company. We try and have our staff be people that are in the music scene anyway. The festival is more like a big club than it is a big festival.

AD: What did you learn from last year’s festival?

GW: A few things we will probably do differently but most of it is structured similarly. Everybody seemed really happy with it.

GW: We are going to add one more stage, a fourth stage, which is going to be a little bit quieter. The singer songwriters are going to be on that stage and some of the comedy stuff. It’s in an area of the park that is quieter.

AD: You didn’t do the comedy last year.

GW: No. This is new. I’ve been doing comedy at clubs here and there, and it’s been going over really well. And then we did an event during SXSW that we had a lot of comedy at and it was really good; people really enjoyed it. You get a break from the music and get to go watch someone tell jokes for awhile.

AD: It’s an interesting mix, the comedy with some of that music.

GW: For sure. But we are going after comedians that are still part of that scene–that tour in that world and play live music venues instead of comedy clubs.

AD: How did last year turn out?

GW: Everybody seemed to have a great time. It gets easier every time you do it.

AD: The line up this year seems to have a wider array of bands. Are there more locals this year?

GW: It’s probably about the same. Maybe a little bit less just because there are so many touring bands coming through. I’m going to add a couple of more bands at the end of the month—there are a couple that we can’t announce until we get a little closer to the dates—but 95% of the lineup is already out there.

AD: What bands are you excited about this year?

AD: Last year you guys turned me on to Okkervil River.

GW: Yeah, that was right before they blew up. Now they are the main act on a lot of big festivals.

AD: Tell us about how you find the bands? Is there a staff?

GW: It’s just me. I’ll just email around SXSW all the agents and let them know what the dates are and ask if anyone is touring around that time, and I’ll tell them to keep this date in mind. Then I’ll start hitting up agents and bands specifically that I want. It’s a mix of them coming to me and me going to them and asking if they want to play. It’s come together nicely.

AD: Do you get any requests from fans for bands?

GW: This year we sent out a big email/myspace blog asking people to give us their advice, a “Who do you want to see?” kind of thing. I was proud to say a good chunk of the bands that people really wanted to see we were able to make happen. There are a lot of pipe dreams out there that will probably never happen, but it’s always good to try. But yeah, I definitely wanted to hear what people had to say.

AD: Can you remember some of the bands that fans asked for?

GW: Bad Brains was one. A lot of the bands that are on the best clips were requested. A lot of the bands that people saw last year and were excited about like, Murder City Devils, but I specifically made a rule that we wouldn’t do anyone this year that we did last year. I might do something next year that I did a couple of years before. I’m definitely not doing anything back to back so that everyone that goes feels like they got their money’s worth.

AD: So you haven’t repeated a band yet?

GW: There are a couple that played the first year that we might add on to this year.

AD: Is this turning into an all year planning thing yet?

GW: Yeah, kind of. I have more people working with me to help on production and sponsors and handling the sound and stuff like that. And those folks will be working further out too—they will probably start working December. I really don’t start working too hard on it until after SXSW because everybody is tied up and it’s hard to get a straight answer. But there are a couple of bands I’m working on this year to try and get for next year.

AD: What else are you doing these days?

GW: Booking the clubs—we have a few that we book a lot.

AD: Do you ever get music fatigue?

GW: This girl Rosa works for us and she books a lot of the bands at Mohawk. And Jared, he is the manager at Red 7, and he books the local bands there. That disperses a lot of the stuff. And Will handles a lot of the stuff at Club Deville. And then I handle the bigger touring acts so that’s just a couple of shows a week, and then they fill the calendar. And then of course the festival–hopefully by next year we will have someone else on board helping out. It’s mostly a balancing act between what I’m doing and what everybody else is doing.

AD: I remember last year we talked about the vision of Transmission Entertainment. How is that shaping up?

GW: It’s coming together nicely. We are doing a lot of online stuff–our website has a lot of features where you can watch videos and stuff like that, so I’m definitely happy with the way it is coming together. We’ve grown in a year way, way faster than we expected. If anything, it’s a question of trying to keep up with how fast the name Transmission has grown. That’s a good thing.

AD: Could be worse.