We went to Grimy Styles at the Flamenco Cantina last night on 6th Street.  The show was insane.  It was a packed house for was their first gig there in a while.  I had never seen them or heard of them before last night.  I was told that they were one of Russ’ favorite bands and his old friends from when he used to do the First Thursdaze gigs down at Ruta Maya. 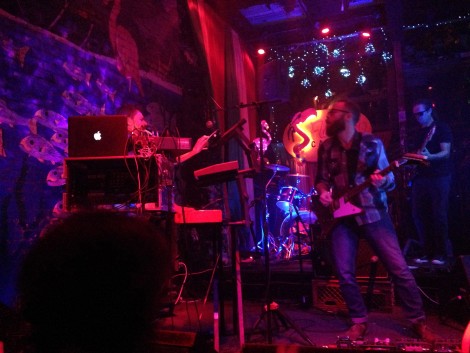 Grimy Styles definitely didn’t disappoint.  When they walked out on stage and started playing, I was definitely surprised by what I heard.  I was expecting traditional reggae, but it was so much more interesting.  I’ve never heard such a funky and smooth blend of genres like this.  First of all the guitarist, Matthew Beebe, was incredible.  The command that he had over his gear in every song was awesome.  He used his his effect pedals’ self-osculation as a whole separate instrument in just about every song.  They had Martin Moeller on the keys which was pretty amazing.  I’ve never seen a more tasteful use of the melodica.  The keys almost added sort of a middle eastern vibe to the music at points, which was pretty sweet.  Jacob Benenate, “Dr. Dubbist”, was tapping out some amazing rhythms and giving the music some really high energy on the drums.  The tempo shifts in each song were awesome and mostly due to his rhythm changes throughout.  Then there was the bassist, Chris Nerren.  He gave the songs their bone-shattering low ends.  The last two that I mentioned were definitely the backbone of the entire show.  They held all of the songs together. The mixing of so many genres was really sick.  A song would start with an almost post-rock vibe, tons of reverb and delayed guitar.  Then the song would head into full out reggae.  Then another song would go from a metal riff into a soulful jam, switching within bars.  They all looked like they were having a blast up there and you could really tell it was special show for them.  It was awesome.  Hats off to these guys and definitely check them out if you haven’t seen them live. 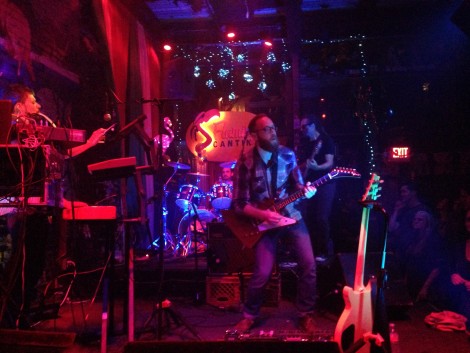