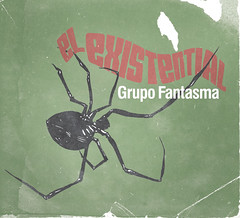 In case you lead a sheltered life, Grupo Fantasma is Austin’s premier Latin Orchestra – which puts them high in the running for best in America. Seeing them play live is a magical thing that will keep you moving and sweating and always wanting more. They have been getting lots of well deserved national attention, especially after the release of their last album, the Grammy-nominated Sonidos Gold.
What I like about this band is their amazing ability to blend funk, rock, techno and psychedilia with traditional old school salsa in a completely respectable way. The result is a progressive high-powered soulful sound that has been shaking clubs all over this great land for 10 years now. This is not an easy feat – most often when traditional music is blended with modern sounds the result is a cheapening of both. This does not happen in the masterful hands of Grupo Fantasma. (Tito Puente and Celia Cruz would be very proud…)
El Existential begins with a simple trap set beat playing a funky hip-hop rhythm, then a distorted power chord comes in, then it busts into full on Latin fury that tells you where their hearts really are. The horn section in this band grabs you and never lets go (There is something about the sound of a baritone sax, trumpet and trombone, and the crack of the timbales that lets you know who’s boss.) Guests include Curt Kirkwood of the Meat Puppets and salsa legend Larry Harlow.
Stand out tracks are: Realizando with its funked out intro, El Consejo’s fast tempo and blazing horns, Montañozo with its Spaghetti Western guitar, Calor’s psychedelic feel and once again, those amazing horns, and Araña Cuña’s lose, ambient intro blending into an Afrobeat monster complete with call and response lyrics. The sound is as big in the studio as it is on the stage.
In all honesty, this album may not be as strong as their past releases, not as focused and with a few more mellow interludes than I’m used to from them. But saying that is like saying “Here’s the keys to a Maserati. It only has 700 horsepower, instead of the 725 that you’re used to.” It’s still an amazing piece of work from one of the most powerful musical machines you will ever hear, which means you should buy this CD now.
Grupo Fantasma’s ability to modernize such a traditional style as salsa music makes them one of the few true innovators of the genre today. In a world filled with bland mechanical over-produced pop music, I hope there will be several more decades of Grupo (and their alter-ego “Brownout”) to come.

SuperLiteBike - debuts with "Away We Go"
Previous