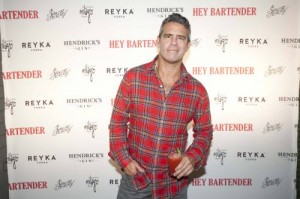 I have to admit, I may have been a little bit biased for this film going into it.  I’ve spent half of my life in the service industry and have therefore developed a bit of an obsession with the industry and the lifestyle.  It is, by its very nature, a career path that attracts the scoundrels, the misanthropes, and the lost.  And bartenders might easily be the most interesting group of the bunch, I’ve learned from experience.  So it’s safe to say I went into this screening with high expectations.

Hey Bartender is all at once a study on the evolution of cocktails and cocktail culture and the portrait of the lives of two bartenders.  The main focus is on Steve Schneider, an ex-marine turned mixologist for one of Manhattan’s finest cocktail lounges, Employees Only, as he struggles to make a name for himself in the increasingly competitive and respected field of mixology, the art of making fine cocktails.  The other focus is on Steve Carpentieri, owner of a more traditional beer and shot bar in Westport, Connecticut that is struggling to stay afloat.

The separate but parallel stories of the two men showcase their journeys through the backbreaking underbelly of not only bartending but of the service industry in general.  Through their eyes the audience catches a glimpse of a side of the service industry most people never see or think about.  The fact is, for your average bartender or mixologist, their work night is ending long after most of us have gone to bed, and even just as some of us are getting up to face our day.  The hours are grueling, the labor is intensive, and the respect, though growing, is often minimal.

But none of that matters when the work is based on passion, and this is a documentary about passionate people.  Beyond the physical beat down that is their profession, there’s genuine love that the subjects of this film put into every drink they pour.  To them, the cocktail is about more than just the alcohol, more than just the drink.  It’s an all-encompassing experience that is to be embraced and enjoyed.  And though the mixologists and the drinks may be the subjects of this documentary more than anything this is a film about passion.

Director Douglas Tirola has assembled some of the best minds in the field to lend their view on the history and execution of the mixological arts giving the audience a quick 101 of the subject matter and the ups and downs of the craft.  Despite being treated almost as an aside, the resulting lesson was a fascinating recount of the rise, fall, and eventual resurgence of bartending as art from the mid-19th century until now.  It’s an oddly compelling story that I wished we could delve deeper into, though that would perhaps encompass an entire film on its own.

Hey Bartender is getting some buzz around South By, with many people speculating that it might be one of the best documentaries at the festival.  Though I’d say it’s a little too early to be making that call, it’s definitely one to beat.

Evil Dead a brilliant update of the Sam Raimi Classic
Next