I Can Feel The Heat 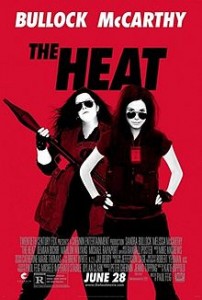 Do you enjoy buddy cop comedies? If so, then The Heat may be right up your crime alley. Take the stereotypical straight laced and goofy FBI agent, Sarah Ashburn (Sandra Bullock), and pair her up with the foul mouthed loose cannon detective, Shannon Mullins (Melissa McCarthy), to get a slapstick heavy, and sometimes formulaic comedy. What makes this movie work is the undeniable chemistry between Bullock and McCarthy which is carved out of something I would have thought to be impossible.

I’ve always felt like Melissa McCarthy channels her comedic style from somewhere in the vein of Gilda Radner and John Belushi. Her character, Mullins is crass and crude which is showcased in The Heat with gags like; Ashburn mistaking her for a man at least twice, or the fact that she doesn’t bathe regularly and her refrigerator is armed to the teeth with weaponry. Alternatively, Sandra Bullock seems to have mellowed out a little and seems less squirmy or mousy than previous comedies she has done, which I believe finally allows for her to be not only likeable, but believable as well.

Once united, Ashburn and Mullins work together to bring down a mutually sought after drug lord by tracking down his lesser minions throughout the streets of New Jersey. The film eventually hits a good tempo, and we find these two working together to get through one silly shenanigan to the next. Honorable mentions go out to the scenes involving Mullins’ family (It’s good to see Michael Rappaport getting gigs). They happily take on the personas of Jersey Shore knockoffs (which are already knock offs of humans) and are just as, if not more, volatile and noxious then McCarthy’s character. The Heat does have one or two gags, particularly involving a cat, that will leave you chuckling thanks to McCarthy’s rare gift for spot-on comedic timing. I could tell you more about the plot, but I think it’s kind of irrelevant and it’s really the undertones of the film that makes The Heat bloom.

If you liked Bridesmaids, the previous film by Director Paul Fieg, you may find The Heat appealing if no other reason than it takes an underrepresented population in comedies (females) and gives them a chance to shine in the ever dominant male centric genre. There are even scenes in The Heat that derive awareness from pushing the adversity of women in the workplace to the forefront; like Ashburn calling out her male counterparts with the FBI for discounting the credibility of she and Mullins, possibly because they are strong willed females. Besides this poignant notion, there isn’t any other obvious subtext to The Heat, but if nothing else, this is the first time we get a buddy cop movie with two leading female roles that I can recall and it works.

The Wolverine Is Almost Sharp
Next