I kept thinking to myself as I watched “Taking Woodstock” that I so would have been there! 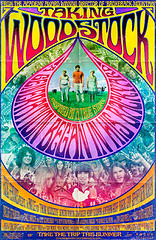 If only I was alive.
I am an avid fan of the event.Much of the music I own was created at that same time.
The documentary “Woodstock” is a powerful film that I revisit often. Right now, as I type Ritchie Havens iis playing “Freedom” from the festival. Obsessed? Maybe. But I feel I am just a fan.

This film kept my interest, even when the plot lost some splendor, there was still the festival organization and crowds that kept me involved. Ang Lee did a great job at setting up the mass hysteria that surrounded the creation and undertaking of said event. This film does not touch the music, in fact we only get a glimpse of the stage lighting from way off. This is a story of how the event came to be and a coming to terms story of a young gay man and his efforts to save his family’s hotel.  It was well acted but there were things that were just overdone. I got the message but it was like force fed over and over.  But, I didn”t care about the plot.  I was totally wrapped in the parking lot traffic scene out in front of the hotel. So many people on there way to the grounds.  I was entertained and intrigued by the madness  and even the soundtrack. This is not a great film but it is well done and original, which is lacking in Hollywood these days. If you like the documentary and are interested in parts of the festival that have not been dramatized,I recommend this one.

BLUES MAFIA AND GARY CLARK JR. SHOT BY ROCKSLIDE
Next