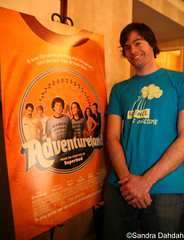 Growing up, Adventureland was the “other amusement park”, known less for its rides and more for the “social opportunities” it afforded excitable pre-teen girls who didn’t need much to get excited. It was cooler than the mall and edgier than Parkwood skating rink but not quite as edgy as Laces roller rink where “real making out” could be witnessed first hand in velour purple booths strategically located in dark corners.  Adventureland, if you were lucky enough to have been born in June, July, or August, was the place to have your birthday party. It was the place to scope out boys and hope that one of them would scope you back and maybe even win one of those hard cheap toys for you or dare you to try and touch their hand on Gravitron while you spun around to club music you were too young to hear in an actual club.  As a kid, Adventureland epitomized every romantic notion of just being alive–an uncomplicated playground of blinking lights and silly tea cups, friends, fun, music, summer…what more could you want?

Greg Mottola’s Adventureland captures the place perfectly. It’s exactly as I would have remembered it, if not for the somewhat bleaker lens.  Instead of the young Long Island girls hopped up on cotton candy rocking out in Gravitron, he hones in on the park’s employees and uses their entangled summer camp-like antics as a backdrop, writing a “sad love song” exclusively for the lost romantics and perpetually confused who worked the gaming booths that at 10 and 11, I was so happy to hand tickets over to. Those expecting Superbad II might be partiucularly surprised at just how sad of a love song it is. For this film, Mottola called on his inner Woody Allen. Mottola explains, “I personally felt like I wasn’t seeing a lot of stuff for young adults that treated emotions or problems in a psychologically believable way. I was quite insecure that people would just get bored if it wasn’t all jokes but I had to try–I had to try and take those emotions seriously.” And he does. Semi-autobiographical, the film centers on James Brennan (Jesse Eisenberg), a highly intelligent virgin hero looking for love–or something that resembles it and also hopefully includes having sex.  Instead of the obvious quest-for-losing-your-virginity-cue-tits flick, Mottola builds a complex character whose need to understand human sexuality is equal to or greater than his need to physically get laid. It’s a far more human emotion and surprising one to see in this genre. Aptly cast, Jesse Eisenberg has an arsenal of facial expressions to communicate his confusion, and while it seemed hard to believe the character with all his naiveté had just graduated college (I kept thinking high school), he does an excellent job of tackling the conflicting emotions that come with the whole human experience, regardless of age. As he forges forward, it’s sweet, sad, and sometimes legitimately painful to watch his journey unfold.  Mottola reflects, “It’s very much about being of an age where all my ideas of romance were childish and that I was waiting to find the perfect love as a young guy.”

Mottola says that when he wrote this he was thinking of films like Fast Times at Ridgemont High. You see a throwback not just to the look and feel of the 80s but the filmmakers that dominated the teenage angst screen. It captures most successfully the John Hughes idea of  drama that we can still laugh at and with; dealing with the heavier things with a joke.  Just maybe not the tits.

The seriousness of Brennan’s journey is balanced by the comedy of a cast of quirky characters. Frigo (Matt Bush), the “ball busting childhood best friend”, Bobby and Paulette (Bill Hader and Kristen Wiig) mom and pop owners of the park who should have been in show business but ended up here,  Lisa P. (Margerita levieva) the glossy and sultry Catholic girl, and Mike Connell (a creepy but perfect Ryan Reynolds) the glory days musician turned mechanic.  At times they teeter on the stereotypical, but then Mottola ads a tinge of darkness to each that is inescapable and undeniably real.  It’s as if he seems to remember his summer working at Adventureland as funny, and the people he worked with as genuine characters, but also profoundly depressing when he considered their future versus his.

Not surprisingly, this is not the case with Brennan and while he doesn’t let him ride off into the sunset on a fluffy cloud of bliss, he does offer him some valuable life lessons. Ultimately, what he learns through his summer journey is that love is really about “seeing a person for who they are and loving them with their flaws and allowing intimacy to happen.” And once you settle into the fact that this isn’t Superbad II or anything like it, the same can be said of the film.