In the Tall Grass Review 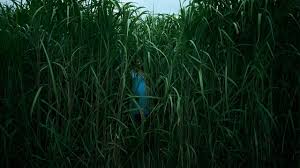 Undoubtedly dear reader you are familiar with Stephen King and perhaps his son, Joe Hill. In the Tall Grass is a novella co-written by the father and son horror duo. This Netflix film adaptation written/directed by Vincenzo Natali (most notably known for Cube 1997) probably could be indexed as one story that didn’t need to get translated onto the big screen, but In the Tall Grass has its own trials and tribulations.

Becky (Laysla De Oiveira) and Cal (Avery Whitted) are siblings on a road trip to San Jose in order to give up Becky’s unborn child. They pull over to the side of the road as Becky is nauseated where there is a endless field of, that’s right, tall grass. Cal hears a boy, Tobin (Will Buie Jr.) crying for help. Cal starts to head into the tall grass to help him and Becky follows. As one might consider a few things before jumping into a potential precarious scenario, they’ve got nothing better to do with their time apparently. The grass is a never-ending maze that they are seemingly trapped in it for eternity as time and space don’t seem to exist. Luckily, Becky’s baby daddy, Travis (Harrison Gilbertson) comes looking for them some time later and happens to stumble upon their abandoned car and also decides to go into the tall grass as he also hears voices coming from the field.

Creepy little boy being included in a Stephen King story, check. Boy’s loving father turned madman, Ross (Patrick Wilson The Conjuring, Insidious franchise), check. Large boulder in the middle of the maze that makes everyone lose their mind when they touch it, check. This doesn’t feel like spoiling because there isn’t much of a story to spoil.

The acting is somewhat fine, but Oiveira and Whitted especially detract from the story with acting that is just barely palatable. Not entirely their fault though. The story is fine, but all the characters lack any depth with the exception of Will Buie Jr. and Patrick Wilson, who is fairly well versed in the horror genre. Even still, the blandness of the dialogue couldn’t be helped on the actors part.

Also, I just never found anything to be creepy about grass. It didn’t work for me, even with all of the gore in the third act of the film. Grass just isn’t as unnerving as corn fields. I’ll say that the video editing and camera direction are top notch. Some of the shots of just the grass are gorgeous and deserve credit. Overall though, I really can’t see how this Netflix original will land as a must see in the tall grass of films that are available for the streaming service.