Inglourious Basterds…That’s a Bingo. Sort of. 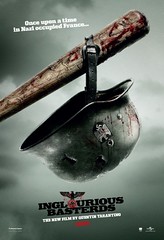 The blood, sweat, and tears in Quentin Tarantino’s Nazi hunting WWII film seem to come mostly from the director himself, whose die-hard love of cinema pours lovingly out of every scene even if it means sacrificing dramatic structure, character development or sometimes, overall good sense. The juxtaposition of a brilliant, tension filled opening scene with a head scratching are-we-there-yet end, and mostly a grab bag in between, requires steadfast devotion to all those involved. Tarantino approaching with a boyish plea, “I really want this to work” to which his actors, who mostly have little to work with (particularly Brad Pitt’s Lt. Aldo Raine and his fellow Basterds) respond, “So do we” and set about trying their best to make it happen for him. If you’re willing or feeling generous, the devotion on all sides is almost enough to carry this uneven and choppy film. If you’re not, the brilliant Christoph Waltz, as Nazi Colonel Hans Landa, will certainly sustain you whenever he graces the screen. It is a peformance that reasonably warrants a film title change. Otherwise, the plot unravels, things go splat, characters appear too late in the game to make sense (as a frenzied Diane Kruger as Bridget von Hammersmark seems painfully aware of). And then there are Nazi killings. Lots of them. And who doesn’t enjoy a good Nazi slaughtering now and then? Don’t over think it and you will be entertained.

Inglorious basterds save the summer for russ
Next