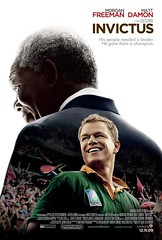 I normally don’t write about anything that doesn’t set me on fire. Tonight, however, I make an exception, as I’m puzzled by the disconnect I feel.
NOT a Hollywood guy, by nature, but still, a film directed by Clint Eastwood, starring Morgan freeman and Matt Damon based on a true story about Nelson Mandela bringing a nation together via their rugby team’s march to the World Cup? Even if not your cup of tea, there are some redeeming factors at work here, right?…Well, that’s what I thought, too. But somewhere along the way this movie shit in my boot.
Have you heard a critic label a film UNEVEN? At best, that’s what I got here.
I’ve learned over time that rhythm and flow mean everything. And those two elements were distinctly missing in this movie. You get the broad strokes, but you’re not emotionally involved because rhythmically there’s nothing pulling you along to sink your teeth into. Call it bad editing. You’re given bits of scenes that never materialize into anything that pulls the story along. You don’t care about any of the characters, and the pacing seems down right rote. And the rugby action scenes are downright laughable as the powers that be don’t seem to know flip about what’s under the skin of this sport. They even got the Maori War Dance from the All Blacks all wrong.
I guess you can’t bat 1000 all the time.
Here, Clint and company fall miserably short on what could have been a very good film. Color me confused.