The Daze talks to Canadian documentary filmmakers Scot McFadyen and Sam Dunn about their days and nights on tour and on board with Iron Maiden. 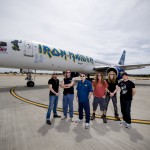 AUSTIN DAZE: So tell us how this project came to be.

SCOT MCFADYEN: We did a couple of movies before this and Maiden was in both so we have a good relationship with the manager. I sent him an email with a P.S. that said, “We’d love to do a documentary on Maiden.” That was September 2007.” He thought it was a good idea and we made plans to do it in 2010.

But then we saw the press release for this tour and I was thinking this would make a great doc with Bruce flying the plane and all. So we flew to London and tried to convince him. He still wasn’t into it because he thought the band wouldn’t be into having cameras on them all the time–they are pretty private and it was such a hectic tour. So it took him about a month to say yes.

AD: Did that privacy and reluctance to have cameras all the time make it a hard shoot?

SAM DUNN: One of our first shots in the film is of one of our camera guys going up to Jan and he comes right to the camera and pushes it down. So there was an element of just uncertainty. We had heard they were good guys but we werne’t sure how comfortable they were going to be having us around all the time. They had never had an outside camera crew before; they always had their own people so it took a bit to break the ice.

SM: One of the wives was Canadian and she knew our previous films and she got all the other wives on board. We thanked them at the opening and said, “Without you guys we wouldn’t have gotten in.”

SD: It’s our new documentary methodology: befriend the wives and everything else will go fine.

AD: You were with them for the entire tour and flew with them on the plane. What was that like?

SM: It was grueling. We had eight weeks with them and two days off in 8 weeks. Those guys are not really big partiers at all but the crew and they are insane. But it was pretty cool. We got to play tennis with the guys and by the end they moved us up to first class.

SD: The band and the crew come from working class London and I think they like to take the piss, especially out of Canadian colonials like us. So I think at first, especially with the crew, we kind of felt like we had to earn our points. We were constantly reminded that we weren’t rock stars. We were at the bottom of the rung; the new crew. We had to slowly work our way up. We were just in Brazil with them and we walk into the hotel and see all the crew guys and it is like, “Hey, how’s it going?” We think back and it is like, “You bastards!” They made it so hard for us.

SM: I had nightmares—it was the nightmare of going back to school and it was the first day of school. It was literally that kind of thing. It was 70 people and they were really tight knit and had their families and then us, the 7 Canadians.

SD: It was really hard to get in but once you do, you’ve been embraced. It’s like you’ve been absorbed into this amoeba and it feels like we’ve known them forever. It’s very strange.

AD: When you first conceived of this documentary did you have an approach in mind? Were you coming at it as Maiden fans?

SM: Definitely as Maiden fans. We’re not hiding that. There has been six documentaries about the Rolling Stones and Iron Maiden has sold over 70 million records but most people don’t even know that Iron Maiden is still together. They have a huge group of fans but then all these other people don’t know that they are still around. We thought it was important to do a celebration of that and try and figure out the phenomenon of Iron Maiden. There are a lot of fans in the film and we wanted to figure out why they are so devoted. It’s like a cult.

SD: I think we came at it on two levels: one was the phenomenon of this tour which was one of a kind. We knew it was going to be the first of its kind in history and we needed to capture whether it was going to work or not—taking the band and the crew and all of the equipment on a plane and flying literally around the world. But on the other hand, it’s not an expose by any stretch of the imagination because it’s actually a really functional, successful band, but at least kind of trying to peel away one layer of the band and trying to show what they are like as people because a lot of people have preconceptions of what metal bands are like. They think that they drink themselves into the grave and there are groupies around and things like that. People will see in the film it’s not like that at all. They actually take care of themselves and that’s why they are successful and now are bigger than ever. I think that surprises a lot of people.

AD: On that note, was there anything that you were really surprised to learn about them? Other than the drinking and groupies.

SD: Steve Harris is the bass player and founder and the leader of the band. I’ve listened to the band since I was twelve years old and I’m a bass player so I have a bit of Steve Harris worship. Everyone talks about how rock bands work very hard and I always wonder if that’s just lip service or trying to paint over something. When we went to LA we had come all the way from Japan and flown God knows how many hours and everyone is jet lagged and the first thing Steve does when he gets off the plane is go down to Kevin Shirley, his producer’s studio, and spends the entire day working on the mix of this live record they are working on. It sort of through things into perspective; that there’s a reason why they have had this longevity. I was just surprised that level of focus existed. They have reached this level in their career and sold all these records–they don’t really need to do that. They could get someone else to do it. They are still hands on and still care.

SM: I think their sense of humor. It’s like Monty Python. That was a surprise. Especially the drummer, Nicko McBrain.

SM: April 21st is World Maiden Day. It’s going to be in 32 countries. The whole idea was that you have to see this film with people. It’s better to do it with a full audience than with six people on a Tuesday. So that was the idea. It is very cinematic. It’s a documentary but it’s also kind of blockbuster. It has the live show and being in Columbia with 60,000 fans.

AD: Do you think this is something that will appeal to non Maiden fans?


SM: I think there are a lot of indie kids that will want to see what’s going on. They may have an ironic love or maybe had a buddy who at one point was into Maiden. There’s a relationship with Maiden. Even in the indie world. I think their fashion has come from that. So it definitely is going to appeal to not just Maiden fans. You don’t want to preach to the converted only.

AD: What’s next for you guys?

SM: We are working on a documentary on Rush. We are doing a film about the history and influence of Rush and how they are really one of the biggest outsider bands that there is. They have had some radio hits but by and large their fan base is pretty nerdy—99% guys who are into air drum. But I think people really latch onto their musicianship and their influence musically. We’ve been blown away by the breadth of musicians that are into their music. I mean I grew up listening to Rush and I didn’t really have an idea. A Maiden fan you can spot; a Metallica fan you can spot; a Slayer fan you can definitely spot; but Rush fans are all over the place. Billy Corgan, Trent Reznor, Radiohead.

SM: All of these guys agreed to be in the film which is kind of cool. It’s got that indie and metal side to it.

SD: It would be a better film for SXSW. Having metal here always feels like a fish out of water in a way. But I think the audiences here love music so I hope they can come away from this at least respecting what Iron Maiden has accomplished. They may not necessarily love their music but I think, like legends of any genre, you have to respect what they have accomplished.

SM: As a documentary, on a technical level, we spent a lot of time on it and it looks pretty amazing and we worked with an amazing editor so when you are at the theater it feels like you are at a concert. It’s one of my favorite live concert experiences on film.

SD: It rocks. I think you would be pleasantly surprised by how really light-hearted and celebratory the film is. It’s probably not what you would expect about a film about heavy metal. When it comes to the band and the fans and the behind the scenes that we captured, it’s a surprising feel good movie. And it surprised the band that they are kicking ass and are in this position in their career.

Will Hartman at SXSW with FOOD FOR THOUGHT
Previous

The Postelles from NYC at SXSW
Next