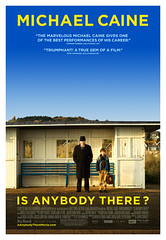 I walk in to find an older but still fantastic Michael Caine playing a retired magician named Clarence who just moved into a home with other mature adults. He bonds with Edward, the son of the couple running the old folks home. Edward has a morbid fascination with death while Clarence has a grim attitude towards his fading life. Together they discuss death, the afterlife, learn magic tricks, and even take a joyride, all the normal shenanigans that an 11 year old boy could have with an elderly man.

Maybe it’s my own disturbing fascination with mortality and love but I found this movie to be really interesting. One walks away from this flick with a notion of living life with no regrets while simultaneously lamenting one’s choices.  After all, each of us will reach a point in life when all we have is time left to reflect. The smaller side stories in this movie really touch your heart as well. Even the younger generations can forget what was once so important. So, not only was this a brilliant British film with lots of laughs it also tugs at the ol’ heart strings in all the right spots.