Jonah Hill: Stop Me if You’ve Heard This One… 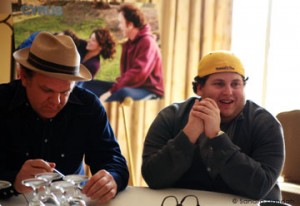 Jonah Hill along with fellow co-star John C. Reilly spent the week at SXSW making the rounds promoting their new film Cyrus. Such junkets on any given day are awkward, contrived affairs–group speed dating meets arranged marriage with the press playing the role of ugly suitor to the young resistant bride fondly known in professional circles as the “talent”. On this fine morning, after a two hour delay, I began to wonder if any potential talent match was worth it, particularly when there still five more to go after almost five days of well, doing them. And then I hear him–the booming rasp of an excited Jonah Hill, the voice pounding through the open doorway of our adjoining suite at the Four Seasons.

“I’m on a plane coming back from Australia…”

He tells an audience we can’t see next door.

“And who is sitting right in front of me, but Al Gore. No really.”

A colleague stairs down at his pen. We hear a few uncommitted chuckles from behind the wall.

“And he gets up to go the bathroom and he’s gone for 45 minutes. Seriously.”

Nervous laughter travels around the room like a stadium wave.

“And now I have to go and I’m thinking, that’s Inconvenient News.”

The joke, true or not, is funny. The command for which this young man delivers it, the timing, the control– is hilarious. Jonah Hill has entered the building.

It is a few more minutes before he actually enters our room and when he does,  he takes his place at the round table, sitting with a determined thump. But before anyone can ask a question, he has a question of his own. Well, technically it’s a question, but really more of a scathing critique  that happens to end with a looping upward of his voice of the previous night’s Q & A. He tells us, “I love this city more than anywhere else and I was a little let down by the quality of questions you people had to ask.” He has an example:  “Like, you’re shoes are really dirty in the movie and then they are really clean now, what’s up with that?’ Come on guys, forget about me, you have John here and the filmmakers here, aren’t any of you interested in asking a real question about how they made the film?”

His piercing blue eyes meet each one of our gazes and in this direct, borderline combative exchange, offer a reveal that in ten minutes our collective questions so rarely get: authenticity. This guy doesn’t fuck around. And with that gaze it is clear in no uncertain terms, there isn’t a chance in hell you are going to forget about him. Certainly not after Cyrus. To most people, or the “average guy on the street”, as Jonah explains, he  is that ” guy from Superbad.” In that movie, he plays “a loud, obnoxious, cursing seventeen year old kid.” And with that role, “did what the director asked him to do.”  And until now, based on Superbad and other “broad comedies”  it was easy to assume that was his acting style. With Cyrus, he it taking it another level. Or down, to be more precised. The character, with terrifying focus,  requires a more nuanced approach to getting the laugh than relying on volume and degrees of obnoxious. Jonah explains his character as a ” far more restrained person that is a completely different performance than the one you most likely know me from.” Restrained is an understatement. What he captures is often down right scary.  And very funny. In this case the humor comes from how straight he plays it, the laugh from the joke appearing long after the line has been delivered–a definitive new take on such a quickly established and hard to erase persona–something Jonah seems to appreciate but has no intention of being held captive by.

His concern, ultimately and always,  is with the joke–how well it plays and how far. When it comes to watching playbacks, he often does because “because I want to know if I stemmed on something improvising–I want to know if it’s worth it to push that at a later take.” As if to illustrate the point of the importance of achieving comedic gold, he compares theater to film, favoring the latter for being allowed “to take things over and perfect it and re-shoot it”; to take a “year and get the response from the crowd when I believe it’s perfect.”

Beyond the perfecting the joke, his larger goal is to become a director. Jonah says that while he “feels lucky and blessed to be doing what I’m doing now” this is his “intention completely” and “exactly” what he wants to do.  While he gets to use the films and “great directors he works with”  to “learn”, Jonah doesn’t feel compelled to define anything. “I like Robert Zemeckis as much as I like Paul Thomas Anderson” (a reference he clarified in this interview in case we weren’t as, um, educated, ‘I like Back to the Future as much as I like Magnolia.’) “So if there is a script that inspires me to spend 2 years of my life telling that story that’s the movie that I will direct.” Adding humbly,  “If I’m lucky enough for someone to let me do that.” Until that time comes, we are lucky enough to get to witness his  education.

CLASH OF THE TITANS 3D PISSED ME OFF
Next