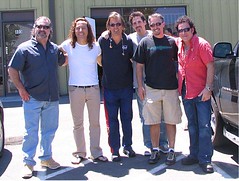 I finally connected with Deen Castronovo, drummer from Journey. We joked about Ozzfest, how amazing Geezer Butler is and the not so glamorous sides of touring. In between laughs, we chatted semi-seriously

Marisa Williams of Austin Daze: I’ve noticed that Steve Smith had been playing with Stew Hamm in GHS. Did you replace him, so he could play in the trio? What led up to you stepping into the shoes of one of your drumming idols?

Deen: Basically, I’ve known Steve since ’87. I was a huge fan of Journey; I used to see them play all the time. Their lighting director was the manager of our band, Wild Dogs, and he introduced me. I was hard for me, because I was only 17 or 18 years old, and it freaked me out that Steve knew who I was. The fact that he thought I was good blew my mind. We kept in touch, and when everything died out, Steve and Steve left, I was Neil’s first choice, because I was with him in Bad English.
MofAD: I’ve known Ozzy to be a prankster; do you have any funny stories from playing with him?

Deen: Ya know, when I was working with him, there was not a whole lot of pranks going on. We were finishing the record in Paris. He did do something to Joe Holmes in Chile one time though. Ya know how he throws water all over stage? He got a bucket of water – and Joe was wearing Doc Marten’s boots – instead of pouring it on his head, he poured a bucket of water in his boots. I can think of another time, too. He has this huge squirt gun that he sprays on stage. In Monterey, he nailed me in face with this big water gun. It was great though. I enjoyed recording with him.

MofAD: How did you get hooked up to play with Steve Via?

Deen: Well, that was a neat thing. We were on tour, Bad English, and Steve watched us play. He said I played wicked, and I was in awe. They were rock stars to me. He asked if could play to click, and cancel out a click, all this technical mumbo jumbo. I said I could do whatever he wanted. He actually called me to do the Ozzy gig. He had been called, and had to do this and that, so he called me. So I played for Ozzy, and while I was playing, we wound up doing some recordings at his house. He’s one of the scariest players every, Steve Via. He’s like god of guitars, Man. I’ve played with all kinds of great players, Zakk Wylde, Neil, Marty Friedman, and I’ve been very fortunate.

MofAD: Does it get monotonous playing the same hits over and over again with Journey?

Deen: Ya know, after 8 years for me, no. I think Neil might find it a little monotonous, but Steve and I do get a little freedom. There’s the same songs, but you try to embellish. We get the freedom to play as we want within the context of the songs; we get to embellish and put our own style in. I grew up listening to Journey, ya know? I was in heavy metal, but it was a guilty pleasure to listen to them. I have to pinch myself every day doing this.

MofAD: What new things are on the horizon?

Deen: Well, I don’t know if you’ve heard new record, musically it’s still Journey, but everyone gets to sing on this album. We each sing a song or two. We have grown, an unnatural progression. This configuration has been around the longest of all the versions of Journey. We are all, progressing as players, friends, in our relationships; we’re playing and growing as people and musicians.

Deen: If I could play with Paul McCartney, he’s the king, I would die. It would be great, but I’d have to have the Journey guys as my backing musicians.

MofAD: As this interview is for an Austin publication, have you spent much time in the city, and if so, what do you think of Austin, Texas?

Deen: Well, the only time I’ve been there was when I played there. My first show with Ozzy was in Austin in ’95, I think. We played the Austin Music Hall, I think it was. It’s been a long time. Usually, we go in, play and leave. Neil has spent a ton of time there though, and he says it’s a Mecca for musicians. I hear it’s really great. I hear Sandra Bullock lives there, but her husband would slaughter me. His arms are bigger than mine, so we’ll just leave that situation alone.

MofAD: To wind up the interview, I have three questions that I like to ask everyone, merely because I can. They are psychological, spontaneous creativity questions. First, if you were a unicorn, and you could be any color but white, what color would you be and why?

Deen: Purple, because it’s my favorite color, very passionate. I tried to get drums that were purple a year ago, but it came out magenta. This year I went for blue, so they wouldn’t mess that up. It’s a very regal color, so I’d have to be that.

MofAD: Second, if you were a yogurt, would you be mixed fruit, fruit on the bottom, what flavor and why?

MofAD: Finally, what flavor potato chip best describes your personality and why?

Deen: Let me think. I guess it’d have to be those ones with four cheeses, Doritos. Have you seen those? I’d say those, because I’m cheesy in every way. I’m 40, but I act like I’m 20. They have to keep an eye on me in the band.

MofAD: Is there anything that musicians should know when starting out?

Deen: For me, my advice is to learn every style of music. Longevity is the key in this business. To become huge and dead is not good. If you can’t adapt, you might as well be working at Burger King. I could keep working until I’m 55. So first, learn every style and be able to adapt, and second, save your money. I did not do that the first few years, and now I am. At one point, I bought 6 cars at one time. I had to! I was like, “look at all this money!” I wound up selling them all later, losing a bunch of money. It was like in 2000, and I had only been in the band for two years. Dad was 75, and he’s ultra tight. He put all my money away, so I could retire.

MofAD: Anything we haven’t talked about that you would like to add in? Any other news? Closing thoughts?

Deen: Gosh, I really don’t. We’re playing everywhere, giving away CDs at every venue. We’re so lucky to do that. We’re glad that fans still love us and that people like you will call and do interviews. It’s not a hassle, and we’re blessed to do what we do. To have people get interested is mind-boggling sometimes still.

Marisa Williams is a freelance writer, photographer and author, www.lulu.com/thorisaz