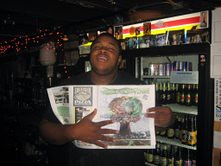 With the voice of an angel, this Nigerian born song bird is taking Austin by storm. The Daze caught up with him to talk about living the American dream–in Austin, Texas.

AUSTIN DAZE: I didn’t know you were from Nigeria. When did you move to the states?

AD: I read that you speak 3 languages. Do you do any songs in other languages yet?

KJ: French. I always incorporate French—not always but in some of my songs like the title of my first album, The Way I Feel, both choruses are in French. I like doing that but at the same time I still try and bring the meaning or explanation in English so that you still get what I’m saying. My native language which is Ibo, I haven’t written anything in it yet, we were colonized by the British and it’s been English all my life. I think I flow better, I dream in  English or whatever you want to call it. 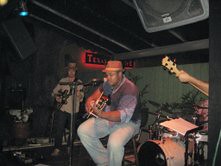 AD: I understand that Otis Redding and Marvin Gaye were major influences. Anyone else?

KJ: Growing up my dad spun records: we had Otis, we had Marvin Gaye, and we had Bob Marley. In Africa and the rest of the world, Celine Dion is huge. Some people would be like, “Why Celine Dion?” She has an amazing voice. I wasn’t writing songs when I was back home, I was singing, so I always kind of related ‘cause it was just like she was an instrument. You tell her what to sing or you give her something and then she makes it up and I’ve always been that way until coming to America when I started writing songs. Then you had R&B, so Boyz II Men was huge. Coming here I got introduced to Jeff Buckley and he hits some high notes that I die for and that became a huge influence. Tracy Chapman and then Jackie Wilson, Jackie Wilson because of the high notes as well, and then Tracy Chapman because she is conscious of the world and I try and bring that message as well.

AD: Were either of your parents musical?

KJ: My mom was. She had mentioned something about her singing when she was little but that was it. I think my sister can sing too.

AD: Are you the only one here in the States?

KJ: My brother is in New Jersey and my sister is in Connecticut, and my family—my dad and mom and 8 year-old brother – are back home.

AD: How do you feel when someone compares you to Aaron Neville? He’s so angelic and I think you are too.

KJ: The first time someone said Aaron Neville, sadly enough I didn’t know who Aaron Neville was, so I went and did the research and I heard a couple of the songs, and I was like, “Oh. Ok, I know where you are coming from and thank you.” It’s a big deal. It’s flattering. Not even flattering, it’s good—it’s good to hear. Like the lady that said that my music was like, “Aaron Neville with Bob Dylan lyrics.” That’s big. You can’t say anything but thank you.

AD: When did you first realize you had this gift of such an amazing voice?

KJ: I was in the choir since I was 9 years old. In school I got voted best singer. I always knew I could sing, but it was a little bit different because I knew that the way that I sounded wasn’t like anybody else and that was really hard to come to terms with because in my age, in that point of time, the most important thing to you in Sixth, Seventh, Eighth grade is that you want to fit in. You want your voice to sound like the radio. I think I’ve come far enough to say, “This is my voice, this is the style it is, and I’m OK with it.” It did take a while, though.

AD: What’s the most rewarding thing, since moving to Austin, that you have accomplished?

KJ: It’s been just all bundled up in one. It’s been coming to Ruta Maya and meeting Ozzie and then meeting my friends who are amazing musicians and surrounding yourself with all that positive energy. I’ve met a lot of people who are competitive like I am–but it’s a healthy competition; it’s a good community and you are happy for the next person who is doing better than you are or you can see striving to get better. The CD release was amazing—the CD sold out and the merchandise sold out. And then getting a gig at Stubbs and Momos—it’s just been one of those things that I’m really thankful for. I know I work really hard for it, but it’s given me the whole confidence that hard work pays off. So much in life, you see people who work so hard their whole life try their hardest and opportunities don’t open up for them; it doesn’t work the way it’s supposed to work. But it’s working so far for me, and I’m working hard and seeing the results, so I’m in a good place right now.

AD: Is that why you moved to Austin?

KJ: It’s funny, it was my 25th birthday, quarter life crisis, I’m sitting back in Rochester, New York, and I’m just like, “I can’t wait for people any more to try to find me and my music. I have to take it to them.” I had a friend since I was five years old-we came to America together—and he had come to Austin for his grad school and he was like, “Why don’t you come to Austin?” And I was like, “Why am I going to Texas? Why would I want to go to Texas?” He said, “It’s Austin Texas; it’s different. Do your research.” And he is more calculated than I am. I’m a risk taker. In my mind I was like, “If he feels this way about this place maybe I should do my research.” It took me about a week—went online, saw the venues, saw that there were as many venues here as there were in New York and the cost of living was cheaper here and my friend was here. And we always had this dream that we were going to live together. I just wanted to go somewhere else where people were hustling for the music as much as I was going to be. My friends were very nervous. I have to go somewhere where musicians made music or to the drawing board. I need to be around people that I look up to. I wanted to give music a chance full-time, and if it never worked out I could always sit back and say I gave it a shot. I’ve never been the person who does “ifs, buts, maybes,” it’s never been me–I just go for it. If it happens, it happens which I think it will, and if it doesn’t nobody can throw it back in your face and say that you haven’t tried.

AD: Are you prepared for the success that we all feel is going to happen for you?

KJ: I don’t know what success means. Success is different for everybody.

AD: What is your ultimate goal?

KJ: My goal is to call my mom one day and say, “Hey, I’m doing it. I’m going against all grains and I’m doing it.” So I am ready to drive, fly, swim, wherever I need to go to get the music out there.

AD: I’ve read that Austin kind of reminds you of Nigeria. Is it the heat?

KJ: The heat for one. People are nice. Maybe it’s the whole south and hospitality stuff but people are nice and it feels like more of a community.

AD: Your voice is so different from your persona.

AD: Your voice. I pictured you as an ethereal, young man and that is what you are. That’s what stood out to me at first, hearing your voice from outside the club and never having seen you before, it just amazed me. You have this angelic voice that stands out from everybody else out there right now and that’s what is going to take you far I think.

AD: I read that you were referred to as a “conscious angel.” What does that mean to you?

KJ: I don’t know what “conscious angel” means. I’m a very spiritual person. Not necessarily religion, coming from Africa I’ve seen what religion can do–especially if you are a fanatic. It’s unfortunate that the so called religion that is supposed to bring peace and love is what tears everybody else down. So I’m very spiritual, very spiritually in touch with myself–I know who I am. And sometimes I wish I wasn’t that way. Sometimes I wish I wasn’t conscious of everything else around me because to me it’s all energy. I feed off of energy–I just know when it’s positive and when it’s negative and sometimes I ask myself, “How come people don’t worry about what I worry about?” There is feel-good music out there that makes you want to dance and then there is music that makes you want to think. Music is a journal for me. I think about all this crazy stuff that goes on in the world, and I bring it to the music just because I want to have a meaning, but then at the same time, there are some songs that are just out there.

AD: I think you represent both.

KJ: Exactly. Back home we have music called hi-life—it talks about everything that goes on but the music is happy. So it’s happy music but the words are exactly what’s going on in the world and how sad or how good it is. That’s what I try to do: lyrics are maybe explained that are morbid, depressing, but the music behind is brings you up—so it’s a balance. You can be rocking to one of the tunes and then it’s, “Hang on, maybe this isn’t something I should be rocking to.”

KJ: Pushing this album as much as I can and getting it into the right hands. It’s something I believe in. I love touring so that’s going to be the next big thing. Record labels can come when they come, that’s not really a big concern of mine.

KJ: I have an eclectic group of friends on myspace and I think everyone should check them out. Go to the La Familia link on my www.kalujames.com site and there are a whole bunch of musicians that will blow your mind. Other than that, promote love and peace as much as you can. We need that for a world that is going to…

AD: Hell in a handbasket?