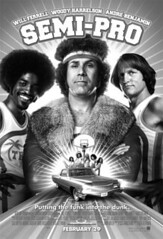 We caught up with the director of Semi-Pro while he was back in Austin, his old school stomping ground, doing promo for the film starring Will Ferrell, Woody Harrelson and Andre Benjamin.

AD: How did you get involved with this film?

KA: I was working at New Line developing and producing movies and my first projet at New Line was Elf, which starred Will (Ferrell)– that’s how I really got to know Will. Tthen the writer of this film, Scott Armstrong, he was working on Elf also. After we finished shooting Elf, Scott had a one line pitch he was going around town with: What about doing a comedy about the ABA (American Basketball Association)? That was all I needed to hear. I grew up in San Antonio and was a huge fan—like more than you could ever really imagine. I was known. I was on the cover of the first playoff program-They had a crowd shot of me screaming–that actually was my cameo in the movie; I made that the cover of the Megabowl program. A couple of years ago Scott came out to LA and we started hashing through the story more after Scott got about 60 pages in to it. We went to South Carolina where Will was filming and showed him the pages and he had some great ideas. When we finished the draft we sent it to Will and he loved it. He said he wanted to do it next and wanted me to direct it.

AD: Were you looking for something to direct?

KA: This just evolved in a very organic way. Directing was always something I was interested in. Developing projects at New Line afforded me the ability to be really creatively involved in the projects that I worked on. So I worked with a lot of great directors and tried to work with the production design. I would think after a take, “What would I tell the actor right now?” I just always tried to think in those terms. When this opportunity presented itself I decided to try and take the leap and hope that I didn’t fail miserably.

AD: How did that feel?

KA: It was a great adventure and I would like to keep doing it.

AD: Was it hard to get any work done because of the comedic group?

AD: How did you keep that together?

KA: Well it was hard for me because I’m usually one of the idiots and I had to try and be a little bit more responsible. But we really tried to keep a balance between having fun and the jokes and still being faithful to the production pressures. That worked pretty well. As much as everyone is really talented comedically they are also really professional. Everyone has been through the drill before.

AD:You produced History of Violence and Little Children which are very different from this film. Is there a particular genre that you are drawn to?

KA: I pretty much came up in the comedy world but my tastes have always been very eclectic. I like dramatic things as well. So yeah, I don’t have any formulas.

AD: There is a dedication to Bill Alterman at the end of the film. Your father?

KA: Yes. He was a quasi-original investor in the San Antonio Sprurs basketball team. There were main investors and they opened it up to the community so my father, my uncle, and a friend, went in together and bought one share of the team. So, that’s why we got to go to all the games***