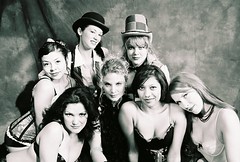 One of the original girlie shows in Austin and still going strong, Kitty Kitty Bang Bang keeps getting better with age. We sat down with the girls behind the corsets to find out how they do it.

AUSTIN DAZE: How did you all get started?

TIJUANA TRIXIE: I’ve been interested in burlesque since high school. I don’t know if you are familiar with the movie Gypsy. My mom told me I had to see the movie; that I would love it. It pretty much planted that seed and that was what happened.

AD: And when was that?

TT: Probably my sophomore year in high school. A long time ago. But ya’ll don’t have to print that. It wasn’t until my junior year in college that I began to think about it again. I just got really interested in vintage art and pin up art and stuff like that. In my mind it was, “Someday I’m going to open a venue that can host a burlesque show or an old time vaudeville show.” There really wasn’t a forum for that. But then thanks to the wonderful world of the internet I noticed that other people were doing it. There is a group in New Orleans called the Shim Shamettes that spearheaded the whole resurgence of burlesque. There is another group called the Velvet Hammer out of LA. They were both real big role models for me and I just kept an eye on them and what they were doing. I was finally like, “If people are already doing it right now then maybe I should do it too.” I thought Austin would be the perfect place for burlesque in that it would welcome it with open arms. That was six years ago. Venues Velvet was my old roommate and I was living in San Marcos at the time and I moved back to Austin and got in touch with her and said, “Introduce me to theater people and dancers. I want to do this.” She was my lifeline to a lot of talent here.

VENUS VELVET: She was definitely the groundbreaker in the area. Didn’t you submit as part of your marketing degree the business plan for the troupe?

TT: I actually drew up a business proposal to take to venues naively thinking that they would fund it. I was like, “Ya’ll should give me money to fund this because it would be really cool.” Everybody was like, “It’s really cool but we are not going to give you any money. If you somehow make this happen we will put it on stage here.” I got an A for it in school! Yeah. It was nice to have all that because it was kind of a framework to do a lot of research on burlesque and see how it could potentially work in Austin. It also helped to get some really talented people to work with me because I think if I were to have just come off the street and was like, “Hey I got this idea and it’s going to be really cool. Seriously, you just take your tops off in front of a bunch of people; it’s going to be great” it might not have worked out as well.

VV: And then our next show was at Momo’s.

AD: Can you think back to that first show and how it has evolved? What you might have learned?

TT: Yeah, cause you are like, “Whoah, I’m topless. Let me make sure everything is in place.” For me it was a really encouraging sign because I just didn’t know what kind of audience we were going to attract. Our first show was at the Ritz. So we were setting up, Bob Woody was just a sweetheart and let us live out of that venue for awhile, this woman who was in her early 60s walked up the stairs and she said, “Hey is this where I get tickets for the burlesque show?” I was just like, “Rock on.” That’s so Austin. A 60- year-old woman interested in coming to a girlie show. I love it. It was a diverse audience.

LC: And continues to be.

VV: I remember the logistics of it. We were sewing costumes at 3am the day before and we are the same girls that are going to be on stage the next night and it’s like, “Whah! We are going to look awful!” We were sewing these seashells onto this blue chiffon at 3am being like, “What are we doing?” And then of course here comes the pasties. How do you apply pasties to your body? We had ideas but…

TT: We just assumed it would work just fine and what we found is that it doesn’t work that well.

LEGS CADILLAC: And not on heavy things.

TT: It takes a long time to set. I have a severe allergy to it which I didn’t realize until after the fact.

VV: But the first show was a sell out.

LC: For probably all of us, it was the first time we did striptease on stage.

LC: What I remember about that show was being really nervous about that aspect of it—the striptease racy notion. I hadn’t done that before. We had practiced our numbers in private but this would be out in front of people. Then the logistical issues of the spirit gum and the pasties. There is always a logistical aspect. I remember being just terrified that the pasties wouldn’t stay on and I had been really anxious about the whole striptease in general. We did this piece, and it was gorgeous, it was the seashells that Venus Velvet was talking about. W e were backstage applying the spirit gum and pressing them down and it still wouldn’t work. We would apply more gum and blow on it more and we all just were pushing on our chests trying to get them to stay on. Well then it was time to go out and we were just praying that they would stay on. I’m not a religious person–this was the one time–and I said, “God, if you exist please let these pasties stay on.” I went out there and things were going great until we did this one move and I could feel it coming off. I was just like, “Please stay on, please stay on, please stay on.” Then I hear a thunk on the stage.

TT: And Legs Cadillac suddenly got a standing ovation.

LC: “What can you do?” I couldn’t sneak off in the wings or something. So basically the left one fell off on the stage. The audience was awesome. They were very gracious.

AD: Have you ever had any problems with your audiences?

TT: Our audiences have actually gotten rowdier but in a good way. I think at first people were like, “What do I do? Is it ok?” After being around burlesque now they feel that they have permission.

AD: How do you all get new members?

VV: Auditions. She is our rookie (Lucky St. James). She was the only other audition that we
had besides the original audition.

LUCKY ST. JAMES: I saw the posters at Momos up at UT and I was like, “This is great I’m so glad someone is finally doing this.” I ran into Ellen at a party and she was leaving to go be a full time yoga teacher and she told me I should go audition and a couple of glasses of wine later I said yes. I showed up with an arsenal of costumes even though they said I didn’t need to bring them.

TT: That was an extremely important aspect for me. I think the whole point is to portray a strong female presence on stage and something imaginative and interesting. That was a really important part of the audition. I had put on the application how characters work in burlesque and how each piece will have a general theme to it and asked what your character name would be and what your theme would be. I wanted to see who was thinking along those lines.

VV: As far as ensembles go, through the years we started filtering out what each other’s fortay was. In the beginning we had 7 girls trying to come up with how one 8 count should go—I drank a lot more in those days. Now, everybody has exactly what we need. We all just put our resources together and it’s worked out like a pretty good machine.

LC: For solos, we present what we want to do and we get feedback. Ensembles, if someone has an idea they will propose it to the group.

VV: It’s so cool when a new show is going to come and everyone is excited about what everyone is going to do. Bibi La Boop is a solo machine. She will say, “Depeche Mode” and I will be like, “How are you going to do that?” And sure enough, come showing of the solos day, she’s done it.

AD: What do you all think about all of the competition?

TT: Within the last couple of years there has been a lot.

VV: We founded Texas Burlesque Fest for the sake of building community. If we are all going to be out here let’s build community. Let’s showcase and show what we each feature. We do a range of modern and old time classic burlesque. There is room for very different styles. It’s competition when a bunch of shows are going on the same night but I think there are different styles that people want to go see. Just like with all the different bands at night.

TT: When a lot of other troupes first started to come around, for me, there was a little bit of insecurity on my part. But when we created the

Texas Burlesque Fest and created a forum it was really nice to feel inspired rather than not knowing what they were doing. Having that forum to come together and get to know other people was really good.

LC: We are doing the I heart the 80s burlesque show right now. We’ve got a bunch of SXSW shows coming up as well.  Go to http://www.myspace.com/texaskitties ***