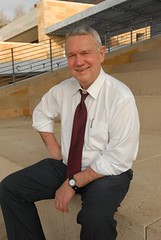 Lee Leffingwell is a City Council member dedicated to Austin. Austin Daze got to speak with the mayoral candidate about his popularity with local businesses, public transportation, and what he plans to do to make our fine city even better.

AUSTIN DAZE: What made you decide to run for mayor this year?

LEE LEFFINGWELL: I made the decision to run for mayor the night Barack Obama won the presidency – surrounded by thousands of my fellow joyous Democrats at the Driskell Hotel downtown.  In the same way that I was inspired in college by John F. Kennedy to join the Navy and serve my country, Barack Obama’s victory help renew my sense of patriotism, my optimism about the future, and my desire to serve. The reason that I’m running is pretty simple – because as a native son of Austin I believe I know the direction our community needs to go at this critical crossroads, and I feel confident that I can help lead us in that direction.  I believe that right now we need a new leader in the mayor’s office who can and will stay focused on the fundamentals of our quality of life: jobs, traffic, public safety, social services, environmental protection, and effective, efficient basic services and infrastructure. I also believe our next mayor must be committed to building renewed trust between City Hall and the citizens of Austin.  Austin city government should be more inclusive, more transparent, and more accountable, and there is some real work to do in the years ahead to make it so.
AD: Tell us a little bit about your background and how you can use that to make Austin an even better place to live?

LL: As I noted above, I am a native Austinite. I grew up in the Bouldin neighborhood, just south of downtown. My father was an Austin fireman and later a Travis County Deputy Sheriff, and my Mother worked for 20 years as an admissions clerk at the University of Texas.  I went to Becker Elementary, then to Fulmore Junior High School, and then to Travis High School, which had just opened on the far southern edge of Austin. I was accepted to the University of Texas and graduated with a degree in mechanical engineering.  After college, I decided to join the U.S. Navy, and shipped out to Florida for aviation officer candidate training school. I was proud to finish first in my class and become a Navy pilot.  Ultimately I spent five years on active duty, including service in Vietnam, where I flew C-130 transport planes. When I left active duty in 1967, I joined the Navy Reserve and served for 15 more years, eventually retiring with the rank of Commander.  The same year I left active duty I became a pilot for Delta Air Lines, where I flew jets for 32 years.  When I retired from Delta, I became a full-time community volunteer in Austin and got very involved with environmental issues, which have been a lifelong priority for me.  I was appointed in late 1999 by the City Council to serve on the city’s Environmental Board, and was soon after elected Chair of that board by my colleagues.  I served on the Environmental Board for nearly five years before deciding in 2005 to run for the Place 1 seat on the City Council. I was honored to be elected to the Council with 62% of the vote, and then re-elected last year with 69% of the vote.  I believe my background of leadership – in the Navy, as an airline pilot, as Chair of a citizen commission, and as a Council member – as well my long-term perspective on Austin will help me serve as mayor.  I want to use the office to help lead the City Council and involve more Austin citizens in efforts to protect and enhance our quality of life. Austin is not like other places, and it will take strong leadership, progressive values, and hard work to keep it that way.
AD: I’ve noticed around town that a lot of local businesses have chosen to support your candidacy. Why do you think that is?

LL: Probably because helping local businesses in the main focus on my plan for long-term economic recovery in Austin.  I do believe that we should continue our work to bring desirable new big employers to Austin, including renewable energy companies, biotechnology companies, and digital media companies.  But I’m very concerned with diversifying our local economy, so that we aren’t overly reliant on any one or two industries. Helping the broad range of local businesses we have in Austin is, I believe, a good way to do that.  In fact, the vast majority of workers in Austin are employed by local businesses with less than 100 employees; it makes sense to me that we would put the bulk of our attention and energy into helping them be successful.  I’ve made several specific proposals to help Austin businesses, including expanding city-sponsored technical assistance and support services; awarding more city contracts to locally owned businesses by revising our scoring matrix; and creating a new standing citizen Commission on Local Business.  Of course, helping our local businesses succeed isn’t just good for the businesses, the employees, and the local economy; it’s also good for our culture.  Our great small local businesses contribute so much to the unique Austin brand, which in turn makes us a more desirable place for people to live.
AD: Why do you feel the city will benefit from making City Hall more transparent by making information on the web site more available and user friendly?

LL: We always make better decisions for ourselves when we’ve been able to involve the most people in the decision-making process. And in Austin, we take the democratic process very seriously, of course.  Accordingly, I believe Austinites expect our next mayor to take meaningful steps to make City Hall more inclusive, more accountable, and more transparent.  To help do so, I’ve proposed several significant initiatives.  For example, I’ve proposed extending the time between finalizing City Council meeting agendas and holding the meetings, so everyone can have more lead time to see big issues coming.  I’ve also proposed holding regular Council meetings outside of City Hall; the idea is to occasionally bring City Hall to the people, instead of always requiring the people to come to City Hall.  As you noted, I’ve proposed putting all of the city’s finances online in a searchable format, and posting all revenue and expenses on the city’s website in real time, or as close as we can get. Finally, I’ve proposed to create the “Mayor’s Community Cabinet” – a new standing advisory body of leaders representing diverse community interests, large enough to reflect a broad cross-section of Austin, but small enough to fit in a room and talk with each other about how to attack the problems we face and take advantage of the opportunities we have in our community.
AD: Can you tell us your thoughts on the necessity for improving public transportation in Austin?
LL: Year after year, including in 2009, Austin ranks as one of the most traffic congested mid-sized cities in America, and traffic is consistently the top concern of Austin citizens.  Traffic congestion represents a significant threat to our quality of life in all sorts of ways.  That’s why on the day I announced my candidacy in January, I proposed that Austin citizens be given a chance to vote on a transportation-only bond package by 2010 – a bond package that would include funding for roads, bike lanes, sidewalks, and other transportation infrastructure.  Mayor Kirk Watson proposed a similar “transportation toolbox” bond package of $150 million in 2000, and Austin voters overwhelmingly approved it. I’ve also said that we should pursue an election to authorize expansion of our rail system as soon as possible.  Even though Capital Metro continues to struggle to build public trust, I know that our traffic problems will never really be solved until we are able to bring an effective, affordable commuter rail system online in Austin. Bottom line: I believe it’s time to give Austinites another chance to vote for real solutions to our traffic problems.
AD: Lastly, can you say a few words for those who are still undecided?
LL: There are important differences in the positions and proposals of the three major candidates for mayor.  You can learn more about those differences by checking out the latest blog posting on my campaign website, at www.AustinLeadership.com.  I hope you’ll take the time to learn about the candidates, and cast your vote accordingly.  I obviously believe that I am the best candidate to serve you as Austin’s next mayor, and I ask for your vote.  If you would like to ask me any question that’s not already answered on my website, please feel free to email me at info@austinleadership.com or call me at 535-0032.  Thanks to Austin Daze for this chance to share my thoughts with you.