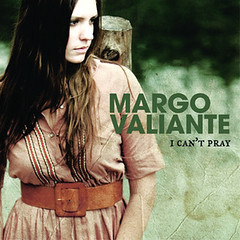 Wearing knee-high boots and shadowed by an upright bass, Margo Valiante took the stage at Momos for her long-awaited debut CD release. The venue was packed with bodies tapping their feet and swaying back and forth creating an impermeable heat untouched, but created by  “I Can’t Pray.”

Her album reins in with a deep, sultry voice embodying Norah Jones, but better. With a twist. With a stronger, deeper sound and more range. She encompasses a swinging, jazzish-blues background wrapped with Texas country roots. Surrounded by keyboards, upright bass and drums, Valiante easily slings acoustic and electric guitar all the while crooning and swooning her listeners.  Her slight frame commands the stage with a big voice and her impeccable range is jawdroppingly sparking in its exactness, especially as a live performance. Her songwriting is touching and sincere in it’s composition with the music carefully crafted around it.

Coming to Austin after spending years in Jackson, WY honing her craft with a stint at Skidmore College as a classically trained vocalist she begins her journey of getting her name known and her music heard. Margo says she felt that coming to the Live Music Capital was a trek she needed to make to “gain the confidence to perform only original material. It’s a mecca for original tunes and supportive, intelligent audiences.” And it’s paid off. In 2009 she was a top ten finalist at the Wildflower Festival Songwriting Competition. She has opened for talents like the Yonder Mountain String Band, Joe Ely, Gurf Morlix, James McMurtry and Tift Merrit.