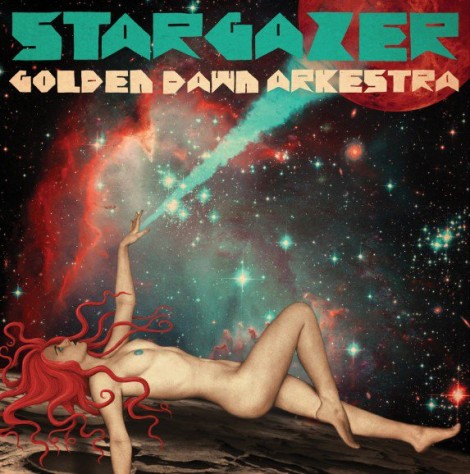 “Spiritual” is the first word that hits me with this wonderful hybrid of sounds. “Powerful” might be the second. “Joy and rapture” is in there as well. What we’re dealing with here is a remarkable and rare thing, and we’re so lucky to have this in Austin. Born of the intergalactic stardust handed to them from the soul of Sun Ra himself, then rinsed in the blood of Afrobeat legend Fela Kuti, this immense gift has landed in very capable modern hands here in our home town. What an amazing thing we have received. It’s a wall of sound with a powerful groove that just doesn’t stop. This is natural and organic music, it’s transforming, it’s what you want. This will help you let go of the BS of normal life and put you in a better place for a glorious hour or two.
While there are many reasons now days I look at Austin and think about how it just ain’t as cool as it used to be, the “Golden Dawn Arkestra” is a glaring example of how Austin is still getting it right, hitting a nail square on the head that no other town would even think of. Breathe in the good, exhale the bad; if you’re here- you’re still in the right place.
“Stargazer” is the second release and first full length album from GDA. The title track opens slowly, and then bursts wide open in grand anthemic fashion. The horn section and vibes begin swirling dramatically over a tight rhythm section thick with percussion. The bass line in this track really drives the song and is an absolute classic. It pushes everything forward, and compels you to do something meaningful, something great. It will put you in another place, a place you want to be.
The album proceeds through a super tight series of songs featuring the powerful polyrhythmic intensity you’d expect from a 15 or so piece “Arkestra” of Afrobeat disciples. Each song has a different mood and vibe, a different thing to say. This is an all-star band of high-powered Austin talent whose members play in other bands you know and love. I’ve been a fan of world and Afrobeat music for decades, I understand the traditional sounds and rhythms being played here, and these cats are really on it.
Seeing GDA perform is a visual spectacle to behold. In true Sun Ra fashion, they are not from this planet. If you are also not from this planet (given the current state of things I don’t think I am either) they will make you feel right at home. Costume designer Echo Higuchi is a professional clothing designer who puts her talents to good use. Everything on stage is glorious, everything glitters and shines, visuals are a high priority with these guys.
Members of GDA include leader/founder Topaz McGarrigle aka Zapot Mgwana ( vocals, keys, sax), Laura Scarborough (vocals, keys, vibraphone, hoops), Alex Marrero (congas, trap set), Joseph Woullard (sax), Brad Houser (sax, bass), Greg Rhoads (bass), Josh Perdue (guitar), Matt Hubbard (trombone), John Speice IV (percussion), Zumbi (trombone), John Michael Branch (guitar), Brendan Bond (trumpet), Robb Kidd (trap set), Echo Higuchi (dancer, costume design), India Jade Gail-Shockley (dancer), Rose Barnett (dancer & costume design), Malika (alto Sax) and many others…
-Maria Mesa

The Greasy Strangler, not so slick
Next