“Hush” is a daring and bold effort from Austin guitarist Adrian Conner. Adrian has been 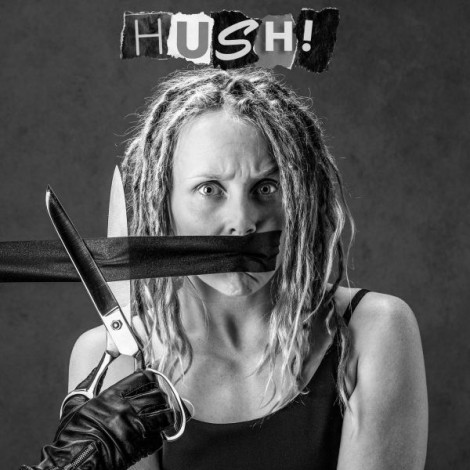 out great original music here in Austin for many years, she’s not someone to be overlooked. I first discovered her with 2006’s “Adrian for President” release which I snobbishly expected to be awful, then stuck it in my CD player and was completely converted by the first track. I’ve been following her ever since, still digging what she does and I’ve never been disappointed. While she is typically known as a hard rocker (who will rock your socks right off if you see her live) this album comes off with a different feel that doesn’t seem to fit any one genre. This is a creative growth step for an artist who is capable of many things.
With this album, she lays all her cards on the table and steps into the acoustic realm. As most guitarists know, playing acoustically is like being naked; it shows all your flaws and weaknesses if you have any. Yet Adrian takes the challenge and shines like the professional you’d expect. She is the real deal, nothing to hide. This is definitely the best recorded example of her guitar work to date. What also needs to be pointed out is that the girl is a really good singer. She has a sweet voice that never sets a foot wrong anywhere, ever.
“Hush” features her great original songwriting, which to me is more meaningful than her guitar prowess. Most original songs are acoustic versions from her albums “BFD” (produced by Go-Go’s member Kathy Valentine) and “Be Your Own Saviour” (produced by Alex Lyon and Adrian Conner). Also included is a brilliant unreleased instrumental “Country Poontang,” which borders on bluegrass, a bit of a departure in style she has no trouble with. She then goes on to some brilliant covers, like Led Zeppelin’s Bron-Y-Aur Stomp, and Jimi Hendrix’s “Little Wing,” all acoustic which she nails completely. These are not easy covers, yet they all come off like she does this in her sleep.
“Hush” is a 3-piece effort featuring Armando Eric Reyes on very solid and in the pocket drums, and Melissa Carper on equally solid acoustic upright bass.
-Maria Mesa