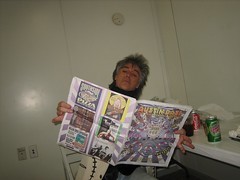 AUSTIN DAZE: How did Old Settler’s compare to SXSW?

MARTY STUART: SXSW is such a cool event but you have to know going into it that you can only pick your spots because it’s kind of like trying to sweep up the ocean into a bucket. It’s gotten so huge so that anywhere that we played during SXSW that we connected with the crowd I felt like was a real achievement. Here it is more concentrated and down home. After 20-something years you guys have definitely got a spell setting out there. We just walked into something that was really great. Thank you for having us.

AD: It is run by all volunteers which we find pretty amazing because everybody loves the music so much they are willing to just get together.

MS: That is the one thing about Austin that is unsurpassed by any other place on earth—the love of music. I mean Nashville, it’s so much about the business and I appreciate that and respect that, but in Austin, the heart and soul has never faded away and at the end of the day that is the most important thing. I’ve said before: there is the heart and there is the chart and both line up in Austin but when you are faced with one or the other you better trust your heart because it will take you to the right place.

AD: You played with Mavis Staples when you were at SXSW. What was that like?

MS: The Staples singers are like family to me. Pops adopted me and Mavis gave me Pop’s guitar not long after he passed away. I spoke at his funeral. Mavis called me up and said, “Marty, you’ve got to speak for Pops. You’ll be following somebody.” I found out how white I was because the speaker I followed was Jesse Jackson. We go back a long way. During SXSW, Mavis was having a resurgence. She had just made a great record and it was wonderful just to watch it all happen for her. It was great.

AD: Any guess to the amount of people you have played with? 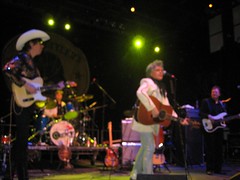 MS: No. Before I became a hill billy sensation I made my living as a musician. At the end of the day I guess I’m still a musician because if the right person calls I’ll still be happy to go play for them.

AD: At the end of the day you are still a fan.

MS: Absolutely. A guy that I always looked up to was Willie. If the music is right he don’t care; he just plays. That’s a great way to be.

AD: You talk about Johnny Cash a lot. Is he your favorite? Can you share anything that he taught you?

MS: He was my mentor in lots of ways and I learned a lot from him. I think the thing at the end of the day that I carry away from him more than anything else was that what a fearless artist he was. He was an absolutely fearless artist. If it rose up in his heart whether it was a concept or to make a film or to write a book it didn’t matter to him if it sold five copies. And if it didn’t, he saw it through anyway. That has been something I really had to lean on from him in the past four years because I took off on a different kind of trail. I had to lean on my faith and courage. I reached to him for that sometimes.

AD: Someone said that they thought you had toured with Phish. Is that true?

MS: I played with Trey at Warren Haynes Christmas Show. Warren puts together shows and he and Trey and some of the guys got together and we had a big old jam at the end of the night.

MS: I think he’s probably the single most important living American artist these days on lots of different levels. He’s like the Pied Piper: he sheds the light; people follow him around.

AD: I heard you are a big photographer and publish books. I also understand you have a traveling show.

MS: It’s country memorabilia. I started collecting that stuff when I was a kid.

AD: What type of memorabilia?

MS: Well, heavy hitting stuff like Johnny Cash’s first black suit, the boots Patsy Cline was wearing when she passed away. It started in my bedroom when I was a kid and it ended up about 20,000 pieces strong.

AD: Did you search them out to purchase them?

MS: I did. Most of them were purchases. The exhibit is called Sparkle & Twang: Marty Stuart’s American Musical Odyssey. It was at the Tennessee State Museum for seven months. It just opened at the Arkansas State Museum.

AD: Are you going to bring it to us?

MS: Suits me. Austin would absolutely get it. It’s the real stuff.

AD: Have any words of wisdom for up and coming artists?

MS: Stay away from my first manager.

MS: If anyone has XM radio I have a radio show on XMX Channel 2 on Fridays. XMX Channel 2 is the coolest place because on Wednesdays Bob Dylan has his show and it runs all day long—24 hours. Thursdays is Tom Petty and Friday and is our show. It’s a really cool show. We go to different cities in America and profile all the different kinds of music that came from there. ***

Laura Dunn and Robert Redford - The Unforseen
Next