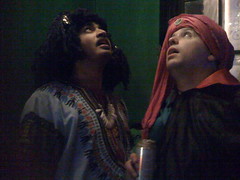 Around 11PM King Khan graces the stage wearing his tribute wig with BBQ sitting to stage left with bass drum on foot and guitar in hand wearing a turban and a cape and commenting on just how sick he’s been thanks to the Texas BBQ he’s tried to consume for the second time since arriving in Texas. Minus the go-go dancers and the usual King Khan and BBQ hijinks the show was relatively subdued and short lived, however the crowd seemed to get more pumped as the set continued.

The garage-punk-alternative crowd was out in full force regardless of the 36 degrees November weather that packed in Austin unexpectedly. With your hand stamped and tight jeans admittance was easy. King Khan and BBQ a Montreal equivalent of garage punk doo-wop brought out Austinites in heavy jackets and canned beer for a show that always produces extreme showmanship and two to three minute garage-punk-doo whop sounds with antics that bring the crowd to its feet and the mosh pit to its knees.

Heavily popular in Europe and bringing it’s raw and cutting show to the U.S., King Khan and BBQ have found a passionate following throughout and visit Austin regularly on tour. Two guys. Usually a producing a sound that encapsulates the listener and puts on a spectacle that leaves concert-goers dancing, laughing and rioting. Donning costumes and spinning, dancing, yelling and engaging the crowd throughout the show they put on an experience that’s difficult to forget regardless of the amount of Pabst that are put back during their set.

At one point a drunken fan attempted a stage dive–successfully without blood involved–but got reprimanded by King Khan saying, ” Man, we’d appreciate it if you didn’t do that stage diving shit. We’re not Pearl Jam, we’re a real fucking rock and roll band.” Touche.

Opening with “Hold Me Tight,” the crowd really began to resemble a boiling pot of water around the third track, Zombie, from the set list that included the lyrics, ” I don’t give a fuck…” seemingly firing up the crowd and providing a an anthem that seemed to fit the mood of the evening or at the very least got people moving to stay warm. BBQ took over for a few slower tracks that brought the crowd down back to it’s level headedness where beer cans weren’t thrown at the stage for no good reason and people took a break from the incessant jumping up and down that makes the show an aerobic workout as well as a possible blood bath if not in great shape.

The show that King Khan and BBQ put on could best be described as Richie Valhans meets garage punk rock. Mid-way through the set, the crowd is let on to the notion that yesterday was BBQ’s birthday inappropriately celebrated at a show in Dallas, but made up by garnering tattoos by the end of the evening.

The show ended with a limp encore, with King Khan and BBQ seemingly exhausted and cold from their Texas tour. When comparing to the phenomenal and amazingly kickass show put on in Atlanta over July 4th weekend at Lenny’s with the Shrines and with special guests like the Black Lips and opening bands like The Howlies, it just didn’t seem a fair comparison to a performance that had more garage rock energy and was about 50 degrees warmer.

THERE IS NO MISTAKE, THIS IS THE BOND WE HAVE BEEN WAITING FOR..
Previous