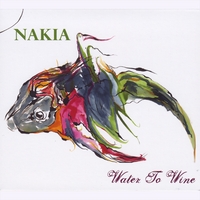 Nakia–Water to Wine— Nakia got a nod from Sharon Jones at this past year’s ACL by pulling him onstage for an impromptu duet. An Austin local, Nakia produces an album that is southernly delicious and joyous accompanied by his back-up band The Southern Cousins and his back-up singers The Fresh Up Girls. He echoes a soulful voice that is deep into American roots music and Water to Wine is fully potent of this sound. 5.5 McRiprock’sDiagonals
Valley of the Cyclops
This debut mixes dark pop that’s sweet and sour using a moody dancy sound that expertly mixes party rock beats, psychedelic guitar jangles and a dash of humor. It’s a fuzzy album that reaches its listeners but grapples at one defining sound that is a a stand out. It’s a dark, strange journey that you can dance to. 3.5 McRiprock’s

Tandoorifinger
Augustus
Born out of a recording project in South Korea in 2006, this Austin group mixes a rap/rock sound that skips through various genres and can’t be singularly pinpointed. “Augustus” includes more of a rock influence with the group sharing vocal leads and harmonies. “Invisible Cars” is all speak against rock invoking a 311 feel without going to far back to that genre. “Red Faced Lucy” is a quieter track bringing out some acoustic work and toned down lyrics. Their next show is at Emo’s Feb. 3. 4.0 McRiprock’s.