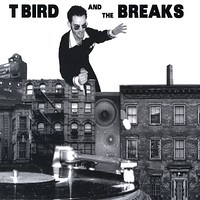 T Bird and the Breaks: Learn About It— Get funkdified because this albums is all about soul, rhythm and blues and it’ll shake you down to your core until it breaks ya into pieces. T Bird and the Breaks has had all sorts of press push and for good reason. They play an amazing show and put together a great album full of pushing soul and punching funk. There’s a big horn-fueled sound against a rock rhythm that hurts you with a punch to the gut and makes you want more all the while bringing in a blues guitar and a gritty growling influenced singing. It’s charming, it’s delightful, it won’t make you stop moving. It delivers what they say it will and more. Tracks like “Blackberry Brandy,” “Juice,” and “Take Time” stand out strong, although the rest of the album doesn’t even dare to disappoint. The album has garnered attention from being named Editor’s Pick at CD Baby.com to a sell out show at their Preview Show on December 12th at the historic Victory Grill. In less than a year, the band had headlined at five of Austin’s best music venues, took second place as the Best New Band at the 2008 Austin Music Awards and was a finalist and second highest voted at ACL’s 2008 online battle of the bands. 5.9 McRiprock’s

Rosemary’s Garden—La musique de Jardin: Power pop without the power. That’s how I’d best describe Rosemary’s Garden. Handed out at SXSW with the billion other freebie CDs of bands trying to get their foot in the door, Rosemary’s Garden just doesn’t live up to SXSW expectations musically. It’s certainly prompted for airplay on an FM station, but not so well suited to your CD player for a relaxing night of solid music listening. It’s more teeny bop airplay than mellow musically driven, impressive tunes that bend your mind backwards and make you wonder just how in the hell they did that. These guys don’t bring those thoughts forward. Clearly out of Hollywood, they call themselves an acoustic/folk/rock quartet, but they forget to mention that they are dripping pop in between. They are taking their band on tour with all dates TBA. You can find them on Myspace with videos galore to capture your pop loving heart and attention if you so desire. 3.0 McRiprock’s

Super Satellite—Self-Titled: Yup, another SXSW invasion that came and rocked. Ever since the summer of 2005, Super Satellite set up shop in Central New Jersey and began making music. Branding their own sounds of post-punk rock tunes with a Brit pop overtone the band is fronted by Christian Edwards doing lead vocals and rhythm guitar all the wall serving as the bands songwriter. Joined by Tim Foster (lead guitar, mandolin and backing vocals), Brian Hurst (drums, percussion) and Chris Wenzel (bass, backing vocals) their collective sound is reminiscent of a combo of the Kinks and Oasis but still bring a little some different to the sound stage.  Releasing their first EP with ten songs mixed, edited and produced at Stratosphere Sound in NYCC by Geoff Sanoff, the album features “Sleepwalking” their first single which is a relatively easy going catchy, mandolin layered tune. However, “Come Over” is a straight up pop rock tune combining a 1950’s style. 4.5 McRiprock’s.

Proud To Be A Trekkie
Next