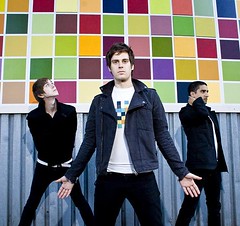 Lights Resolve–Currency: Another SXSW handout that has a three-track sampling which pairs nicely with their trio of a band. They are classic rock, emo rock, rock rock and indie rock all rolled into one (actually three). There is an air of punk urgency with emo lyrics that probably best describe the sound that the band puts forth. Neal Saini on drums, Matthew Reich on vocals, guitar and keys and Sherman on bass, vocals and keys, Lights Resolve uses a trio to make sound happen and decent sound at that.  Syncopation and punchy dance rhythms are incorporated seamlessly.  Myspace and iTunes carry their first and second albums, although Currency is only a three tracker. 4.0 McRiprock’s

The Action Design–Never Say: Out of San Francisco brought The Action Design to SXSW debuting their first full-length album. Influences include: the Smiths, Beat Union, Fugazi, Mylo, all night dance parties, not having a job, strong coffee, tearin’ it up…” Seriously, that’s on their Myspace page. Not a whole lot out there about these guys/and gal just yet, but thank our lucky stars for Wikipedia which gives us a little insight into just where they came from. Considered powerpop/punk the band has morphed from one infusion into another. It was formed after the breakup of the former punk band Tsunami Bomb. Emily Whitehurst and Matt McKenzie came together and started a new band self described as “a refreshing mix of the band’s punk rock roots infused with hard hitting dance rhythms and catchy bass lines wrought with memorable vocal hooks.” Okay. The original lineup changed a bit shortly after the first release of their EP in 2006 and now drumming duties were assigned to Jake Krohn formerly of the Rum Diary, as well as, Jaycen McKissick formerly of Pipedown strumming the guitar. Never Say is an album that hits you in the face with their danceable tunes and punk rockish influence. Currently embarking on tour, they are reachable on Myspace (as are all bands these days) and you can take a peek yourself at what they have to offer.

The Photo Atlas— To Silently Provoke the Giant: Indie, post-punk out of Denver and into Austin for SXSW To Silently Provoke the Ghost came blaring into town. They say that The Photo Atlas was “the result of unprotected sex between The Faint and At the Drive in,” according to the Alternative Press Magazine. Their second release, proves immediate hits like “Class of 2012” and “Jealous Teeth” that brings the band’s ability to write arrangements that are complicated yet equally catchy. In songs like “Paper Trail” front man Alan Andrew, sings about the Denver scene and those that have come and gone. Andrews says, “there was very little discussion when recording, we went into the studio and it was a silent progression. We were all on the same page and we are really looking forward to playing them live to get people moving.” The music is punk danceable with infectious lyrics that sound Bloc Party-esque except minus the party part. This five track EP has had lots of attention because their previous album, No, Not me, Never had them playing the 2008 summer festivals such as the Monolith Festival with the Silversun Pickups, Tokyo Police Club and Vampire Weekend as well as the Mile High Festival with Tom Petty, Warped Tour, SXSW, CMJ and most recently they performed at the XGAMES X FEST in Aspen, CO.  4.0 McRiprock’s.

Rent, "After New York Everywhere Else is a Pleasure Cruise"
Next