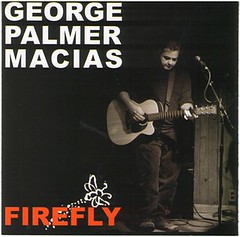 George Palmer Macias—Firefly: Macias kicked off the release of his first solo CD album, Firefly, with a show at the Saxon Pub on April 18th to great acclaim. Firefly was produced by Stephen Doster and engineered and recorded by James Stevens at East Austin Recording with all of the songs composed and written by Macias (except for “Ringtail” written by Martin Parmer circa 1820). The music on Firefly includes instrumentation such as background vocals, rhythm guitar, organ and piano, fiddle and mandolin, bass guitar, trumpet and drums. The sounds are transcendental and as a songwriter, Macias shines. Macias says, “I was born in Houston, TX beneath the shadows of the Pasadena fires where they make the fluids of industry and garbage bags and tries and they make pills to ease the ills of living in this place and they turn the sky strange colors and blow smoke right in your face the boys and girls are making deals on telephones in air conditioned cars and their fathers sent a space ship to the moon I guess they’re making plans making plans for Mars but the water tastes a bit like iodine in the noisy sidewalk cafe parked beside the pillars of the toll road by the toll road that used to be a freeway.” If that isn’t straight up Macias and an example of what he can do with words illustrating just what can do with his songwriting and his album, I don’t know what is. Wow. 5.0 McRiprock’s

Melvyn Bernard—The Life You Thought You’d Have: This album is obsessed with pop/rock oddity with an acoustic guitar. The debut album by Melvyn Bernard aka Jeff Mansk, includes ten songs and one remix written and recorded within a few February weeks and is Mansk alone. Layering vocals, acoustic guitar and lots of knob-tweaking, it seems difficult to believe that it’s a one man operation. The album is packed full of self-reflection and contempation, but also has melodies and hooks galore with a wry sense of humor on the sidelines. The emotional sadness of “Everything Brought Us Here” sits comfortably next to the absurd news broadcast of “Suburban Communion.” Then there’s the Everly brothers that meet Oasis to put out the brevity of “(Theme From) The Life You Thought You’d Have,” as well as, a drunken sing-along of “La La La La (The Cracks)” and a chorally dreamy “You Belong, topped off with a goofy version of “The Memo.” Melding together into one album is a difficult feat, but although the ingredients are seemingly different it leaves a pleasant taste.  3.8 McRiprock’s

Mojo Morgan—Got Mojo?: As a core member of the Reggae super group Morgan Heritage, Morgan  has struck out on his own, going on the prowl in solo land. Got Mojo? is an alternative record  heavily influenced by roots reggae rock, hip-hop and R&B. It’s a hybrid of sorts that’s pulled off beautifully. He puts on an album that’s pure rasta-rock, but keeping it in an alternative universe at the same time. There’s been no loss of feeling, consciousness and lyrical importance to his album, but the album does invite some notable names to emulate and mix together (Jack Johnson meets 311 meets Bob Marley). Track “Tonight” is a definite groove tune juxtaposed to a remake of the cover “Roxanne” by the Police. Some of the tunes are mellowed out where the message comes across clear and powerful, whereas others are ballads such as the sweetheart track “Till the End (featuring Mischu Laika & Laza). The final track “Petrified” is politically relevant addressing domestic violence with strong lyrics. 5.0 McRiprock’s

An Afternoon With BettySoo
Next