“Melancholia”: It’s headed right for us! 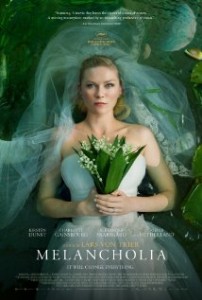 Lars Von Trier has become a side-show act. After the raging misogyny of “Antichrist” made everybody at Cannes 2009 want to puke – (See Willem Dafoe ejaculate blood and Charlotte Gainsbourg cut off her own clitoris. Good times.)  – he returned in 2011 with “Melancholia,” a plodding meditation on well, melancholy, or depression to be more exact. Though “Melancholia” is not the shocker that “Antichrist” was, Von Trier still managed to offend as many people as possible by carrying on in a press conference about how he has sympathy for Hitler and the Nazis while poor Kirsten Dunst cringed miserably next to him. The problem with all that nonsense is that it becomes difficult to separate the Von Trier side-show from the main tent attraction. To be fair, a film should be judged on its own merits, separate and apart from previous efforts and controversies.

And so it was in the spirit of giving “Melancholia” a fair shake that I broke my personal promise to “never watch another Von Trier film as long as I live.” Perhaps I should be a better sport about female genital mutilation and the holocaust. …Sigh…

The first 8 minutes of “Melancholia” provide some of the most beautifully intriguing images that I’ve ever seen, each one more lush, vivid, and mysterious than the last. For a moment, I began to think (and hope) that the film would be a sweeping visual symphony like Terrence Mallick’s “The Tree of Life.” Unfortunately, the remaining 128 minutes did not live up to the splendor of the overture.

The film is split into two equal parts. Part One is “Justine”, named for Kirsten Dunst’s character. Part Two is “Claire”, named for Charlotte Gainsbourg’s character. Inexplicably, these two women play sisters and one would be hard-pressed to find two less likely people to be related to one another, what with their opposite coloring, bone structure, and accents. There is no attempt made to have them sound as though they are from the same place (Dunst is American, Gainsbourg is French). Who knows what mischief Von Trier was up to with that decision, but both women turn in sincere and striking performances. Dunst in particular is a revelation here. The maturity that is beginning to show in her face transforms the dimpled little girl into a real beauty who radiates an unexpected level of depth.

The first half of the film focuses on Justine’s wedding day in which she is married to Michael, played by Alexander Skarsgard (of “True Blood” fame). That seems like a gig a lot of gals would be excited about, but Justine is depressed, and gradually falls apart as the reception drones on. She goes outside to pee, takes a bath, hides in various rooms, and perpetrates many other random acts of weirdness all in the name of depression… while the guests wait around sipping champagne and not looking nearly as disturbed and or bored and angry as they ought to. This is the wedding from hell.

The second half of the film focuses on Claire’s anxiety about the new planet that has been discovered behind the sun and is now on a course headed toward Earth, but expected to pass us by. Claire frets that the scientists have got it wrong and we’re all doomed, but her husband John (Keifer Sutherland) assures her in condescending tones that everything is fine.

The metaphor here is clunky and obvious: the looming feeling depressives get right before they completely implode is like a planet (ten times the size of Earth) heading right for you and there’s not a damn thing you can do about it. Von Trier, if you haven’t heard, suffers from depression. I do not make light of that and I honestly believe that he’s captured some indescribable essence of what it feels like to be at the mercy of misery, but going so far as to name the approaching planet itself “Melancholia” seems, frankly, silly and pedestrian.

Look out! Melancholia is headed right for us!

With all my reservations going into the film and qualms as it unfolded, I will confess that the final scenes were so emotionally powerful that it brought tears to my eyes. This is a testament to the talent that Von Trier most surely has, however much one may argue with his use of it. It is also a testament to the performances of Dunst and Gainsbourg who are deserving of the kudos that are coming their way. (Dunst won Best Actress at Cannes.)

I absorb this type of film as a series of moments and visceral responses, and it’s always with a different light that I look back on the experience as a whole. Overall, “Melancholia” is overwrought, and sporadically engaging with long stretches of tedium.

The first eight minutes are breathtaking and the film is a watershed moment for Dunst, but if you are interested in a sweeping epic that explores life’s imponderables, see “Tree of Life” instead.

"A Lonely Place to Die", a Fantastic Fest review
Previous

Odds Are You're Gonna Love It
Next