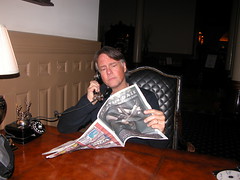 Teeth. Vagina Dentata to be exact. Mitchell Lichtenstein allowed us to peak inside the brain behind this modern day superhero/horror/comedy flick and find out what the hell he was thinking.

AUSTIN DAZE: How has the year been since Sundance?

MITCHELL LICHTENSTEIN: Long. I’m thrilled that it’s finally coming out. Actually this is exactly a year since our screening at Sundance. It’s been a great year doing festivals and stuff. People seem to be pretty excited about it. It’s been great but having lived through the year it’s been a long time coming of finding out if the people in the real world are going to respond to it or not.

AD: This film takes on potentially controversial subject matter. What seems to be the general reaction? Is the reaction what you intended?

ML: People definitely seem to have different reactions. It’s hard to tell because it’s been mostly at festivals. Someone who is going to go to festivals is going to have certain expectations. There is a big group of people that have seen it and get the humor and get the whole parody behind it and then also seems something serious behind it—all the things I would hope people would get. You know, people are also totally turned off by it. You do something like this and you can’t want everyone to love it. But I do think everyone loves Jess Weixler because she’s just so great.

AD: How did you find her?

ML: The casting people. She was the first person they thought of for the part. A lot of actresses were scared off by it and she didn’t want to come in at first. She came in finally for a smaller part and I could see that she would be perfect for the lead and I talked to her about it and once she understood my overall idea of the movie: using this myth, and that although there were a lot of sex scenes in the movie they weren’t going to be graphic at least as far as she’s concerned, and that really, she should consider this the birth of a superhero because she discovers her powers and learns how to deal with them and finds out that they are ultimately a good thing for her. When she thought of it that way she was 100% committed to it.

AD: We saw the film and afterwards, talking within the group, there were several different opinions as to what the film “was”. Some thought dark comedy, some thought social commentary. Want to give us your opinion?

ML: It is all of those things. When you see something in the vain of something more serious it is but I didn’t want anything to get preachy. I really think of it as a dark comedy. But it has these other elements. I think people pick up different things that are serious but the main thing was not to get bogged down by social commentary.

AD: Where did the idea come from? Why did you write this? What was going on inside that brain?

ML: I had learned about the myth of vagina dentata years ago in college. It’s a pervasive myth in different religions and different cultures have versions–it just seemed like fruitful territory. It does say something about men’s attitude for women on a certain level. The myth always has the man conquering the woman and then becoming the hero and I knew that I would want to turn the myth around and the woman would become the hero. Within the context of the movie she would never be conquered. It seemed like you could have fun in a kind of outrageous way and both use the power of the myth and expose it on a certain level. There are movies that have been written as vagina dentata metaphors such as Alien– a female monster with teeth within teeth and it takes place within moist tunnels and dripping whatever. Female vampires have been written about as being vagina dentata metaphor. It seems that if you deal with it directly, if you know immediately that this is a male invention it loses a certain amount of its power because you’re not disguising what the fear is. It is something that men subscribe to. I hope to take some of the mysogny out of it. It remains that way as long as you don’t admit what you are inventing. For example, I’ve heard there is a Hilary Clinton Nutcracker. Whenever there is a strong woman you go for the castration. And that is the same instinct that created the vagina dentata myth.

AD: How long did it take get this going?

ML: I wrote the story over at least five years alternating with other things. It took different forms. It was mostly about narrowing the focus—it originally took place over a longer period of time so there was enough time for the police to find out—just too much. Once it was ready it didn’t take that long to get done.

AD: How did people respond when you first started shopping it around?

ML: Basically either dead silence or no. Most of it is the subject matter but also I had only ever directed a short film. So I put some money into it and then private equity not from the movie world–it really couldn’t get more independent.

AD: How did you finally get it made?

ML: Joyce Pierpoline. I knew her years ago. Years ago I was an actor and in the film The Wedding Banquet which went to the Berlin Film Festival. And she was doing something else then but connected to the movie and we met then and were friends but she was living in Paris and we lost touch for awhile. I ran into her in line for a bus in New York and told her what I was working on. You know, I had some really bad reactions to it but she seemed really intrigued. I ran home and got the script and gave it to her. Once she was behind i, it started. I have an art world connection, basically friends with money, and that helped. Even if somehow some film company bought the idea it would have been channeled some other way—either more into horror or more into one thing and I think one thing that is unusual about it is that it isn’t channeled in one way. I like that because for me that was the best way and most exciting way to tell the story. I think that rarely happens because there is a fear that people, as I’ve read, will think, “Oh he doesn’t know what kind of movie he wants it to be.”

AD: How was it filming in Austin?

AD: What part of Austin was it?

ML: I can’t remember the name. One of the neighbors was very unfriendly and actually showed his gun to our locations guy and said, “If you step foot on my lawn…” Maybe he didn’t know that if he made noise we couldn’t film. There was a thing all day, “Is pornography being shot in your neighborhood? Stay tuned, 5 o’clock.” I don’t know what description they got of the movie.

AD: Why did you choose Austin?

ML: We came here for a few reasons: we were only looking in the south because we had to shoot in the early spring and there are the swimming scenes and it had to be warm enough to do them outside. Austin has great crews because of Rodriguez and Linklater so you don’t have to bring everyone down which is great. What sold me on Austin was Hamilton Pool because it was nature telling me it had to be filmed here. It has the naturally formed vagina dentata with the stalagmites hanging down.

AD: I noticed in the credits that all the musicians are listed individually and that’s not common. What made you decide to do that?

ML: The whole movie was made on a very low budget. Robert Mille,r who is the composer, and his wife plays for the New York Philharmonic and he called in a lot of favors. We actually would not have been able to, with our music budget, have real strings. So he had real musicians and we loved the sound so much and were so grateful that we wanted to give them credit.

AD: The music plays such a driving narrative force.

ML: Robert Miller is classically trained and the one thing I knew going into it was that I wanted to bring in the mythic feeling which to me meant tribal sounds. Then when he started mixing that with his more classical stuff it was such an interesting combination. Glen Velez who is a very well known drummer used all these real tribal drums and stuff to make a really interesting contrast to the classic strings. We had some Bernard Herrmann melodramatic excitement.

AD: What is your next project?

ML: It’s called Happy Tears and it’s a sort of comedy drama about a messed up family. Nothing too outrageous. No one has signed on the dotted line yet but it has a really fun cast.

AD: Where are you headed next?

ML: Back to New York. Do some stuff I guess around the opening. And then continue to cast the new movie and then see what develops with Teeth. When it opens in Austin it will open up in 7 other cities and if it catches on it will keep playing.

ML: If it catches on and isn’t banned then I’m up for it. There is more work for her out there to do.***

John Caparulo and Ahmed Ahmed
Next