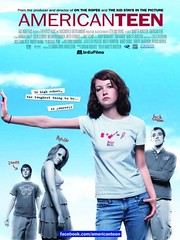 There are new kids in town. They’re from Warsaw, Indiana and they could all use a hug. This beautiful, funny, moving documentary American Teen from Nanette Burstein. It follows the lives of 5 high school students trying to make it through their senior year. Their resemblance to the characters in the Breakfast Club are uncanny (so much so, they copied the movie poster poses for their own). Hanna Bailey, the film’s emotional artist, is a spitting image of Ali Sheedy, Meagan Krizmanich, is this high school’s answer to Molly Ringwald. The other three Mitch Reinholt, Colin Clemens, and Jake Tusing can all be found in one form or another in Pretty in Pink, Weird Science, Some Kind of Wonderful and just about every other film of that genre that I grew up with (except perhaps, Fast Times at Richmond High—but I suppose you can’t win them all).

While the throw back to all things 80s may be part of the reason I fell in love with this film, the kids themselves are the other. Welcome to Battlefield Warsaw Community High, a particularly vicious virtual life where gossip, nasty rumors, cheating, lying, and vandalizing are the weapons of choice. When not busy wrecking havoc on your opponents lives, you are succeeding, accomplishing, and achieving or not, in which case you may easily be disqualified. College is the virtual next level; the ultimate prize. Getting there is a journey of hard-working, hard-thinking, hard-avoiding, and hard-feeling. In this world, everything is times ten. Nanette’s fantasy animation is an apt choice for capturing these kids’ internal existence. It lends itself to the unreal-ness that is these four years of a person’s life. The kids talk about “beating” it, as if it were in fact a game they would have to win. As an audience member and vicarious player, you find yourself rooting for them all the way. The opportunities for academic, emotional, and physical failure are at every turn and there seems to be no end to the people looking to remind you. When Hannah expresses her wish to move to California and her mother shoots her down with: “You’re not special.” The kids themselves offer and are offered a seemingly endless supply of wisdom and ‘isms, some more horrifying than helpful. They range from the oddly practical: when Meagan calls her father to tell him she was caught vandalizing a student’s home he responds, “That was stupid. But it was more stupid that you couldn’t do it without getting caught.” To the equally observant: the introverted Jake’s logic for asking the new girl out is, “She hardly knows anyone at all so I might actually have a chance with her.” And the rational: After Megan and her friends cruelly crank called a former friend another asks, “What if she decides to kill herself in the morning?” To which they keenly decide to leave her a message telling her not to kill herself because “It will get better.”

Their behavior and those living in this small town in “the middle of nowhere” will either shock or resonate depending on where you grew up. The impact will be the same: seeing life through their eyes reminds you just how ridiculous being human can be. It’s a worthy reminder.

Absolutely Floored by the Dark Knight
Next