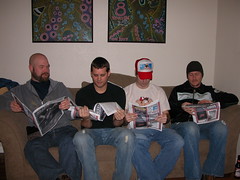 We had a nice chat with Moving Matter. These guys are carrying the torch and keeping the jam band scene vibrant.

AUSTIN DAZE: Where did your band name come from?

MOVING MATTER: It was from this book and we were talking about stuff like how everybody is moving matter and energy and all that kind of deep crap. Also, it felt cool to have a verb name, kind of like Talking Heads type thing.

AD: Tell us about the jam band scene in Austin, Texas. Do you feel there is one?

MM: Yeah, there’s still one around. I don’t know if it’s at its height but it is coming back—it’s fluctuating as everything does. When we were getting out of high school and college we had Larry and Tunji and there was a big scene around them.

AD: Tell us your thoughts when you hear that Austin is the “Live Music Capital of the World”.

MM: Definitely. There are more places to play and more live music every night than anywhere in the world. It makes it hard and hurts bands financially.

AD: What sets a Moving Matter audience apart from the usual crowd?

MM: An alcohol problem! They like all styles of music and have an appreciation for jazz and techno.

AD: What’s the best show that you have played?

MM: It was this little club in Dallas and we were coming off of a three or four night tour on the Southeast–St Charles, New Orleans, Shrieveport. The Shrieveport gig was so awful and then we come back to Dallas and it was the first night in Dallas, this place called Mardi Gras, that we had never heard of. It’s this place off of I-35 that is in an office building—the bottom floor of an office building—and we get there and we are like, “Oh great.” The first band had this 65 year old bass player, this fat guy, and he was just amazing. He blew us away. The energy was unique; the crowd was just loving the place. We just had no pressure, nothing. We said, “Let’s just get up there and do this thing; one, two, three go” where we just do this improv. We had like 15 of our closest Dallas friends there and all of them were texting their friends saying, “Dude you’re missing the best Matter show ever. This is it.” It really was. We couldn’t mess up—we were up there tricking each other—it was awesome.

There have been some other shows that were better for other reasons. Fort Collins this summer was kind of homecoming gig. All the old fans showed up and we packed the Aggie Theater and it was pretty special. The Gazellig show in Dallas was pretty good too.

AD: What makes a good show for you all?

MM: The women. Really, what makes a good show is when everyone is in the pilot seat. It’s kind of like when we start a show we are all in bumper cars and we are just driving around hitting into each other and shit and then once everyone stops and listens and really gets into the same level and everyone is in the pilot seat driving straight ahead, it works. You can tell. What you hope for is that everyone in the band is feeling that at the same time and not just you. It’s about the connection where we can pass the level of self-awareness and get into the level of just playing and feeling it. It’s happening more often the more we play together. You have to get into the routine. There is so much crap and so much luggage you can drag up on stage–every musician knows that–it doesn’t matter what it is whether you are thinking about your overpriced power bill or whatever the problem is at that specific time.

AD: This is our SXSW issue so give us your thoughts on it.

MM: Yes. Our style of music is not what they are looking for at all. We don’t blame them for that. It has its shortcomings and just the fact that there are so many bands and they can only give them 45 minute sets so that by the time the band is basically finished their sound check they are playing their last song. It’s not the best concert experience but just the fact that so many people show up in town makes it really exciting. That first SXSW, we were here in 2003, and there was a big party at Enchanted Forest and it was that Friday of SXSW. This wasn’t even part of SXSW, it’s going on at the same time, but it’s probably one of the coolest things going on during SXSW. It was this underground thing that none of the mainstream people knew about and it went all night long and everybody was going nuts. That was our first experience with that and it blew us away.

AD: This town is changing so fast. In your eyes what do we need to do to keep the music here?

MM: It’s a mixture of cultural change as well as Austin changing. The city should do more to support live music and less to support shot bars. At the same time there is just the sort of the cultural de-evolution where people are watching TV and playing video games instead of going out and seeing art and culture. If the city is going to sell it, you know you get off the plane and see that plaque, then they should live up to it with laws and parking and sound ordinances and venues. There is a lot more they can do. If you use the “Live Music Capital of the World” as your moniker for the city you have to earn it. It’s questionable whether they do or not; whether the city is doing their part. People mean well; I’m sure Will Wynn and others mean well but it’s a bureaucracy; the red tape.

AD: Give us some wisdom for musicians starting out.

MM: Don’t move here (kidding).
AD: What have you learned?

MM: Austin has made us 30-50, maybe 100% better musicians. We came here and thought we were really good and were just blown away by the amount of talent here. It’s made us become such better musicians. Words of advice: learn to play with your ear. If you hear something, learn to play it on your instrument. That’s the biggest tip to any musician. It’s a good experience if you and your band can live together the first few years and get through that that slot on Tuesday nights. It’s kind of the Hollywood for musicians and you are putting yourself through the boot camp and it’s a test. If you can rise to the top of the scene in Austin you can do it anywhere. It makes bands work that much harder.

AD: You guys are on the road a lot. Do you find that you do better out of town than here?

MM: There was a point when we felt that we were saturating our band in Austin by playing every week. It’s definitely exciting to be on the road and meeting new people; new fans. We still, to this day, have found that we have more fans and better turnouts for our shows in Dallas and other cities than Austin. Some people say you need to play somewhere every week to establish a residency and at the same time if you do that all the time, unless you are a lounge party music band, like Boom Box, that can be something that people where people are like, “Well I heard them last week or I can hear them next week I don’t need to go.” Also, the best bands come through Austin and you have the pick of the litter so why would you want to come see a band the again the next week when you can see a touring act that comes through once a year?

AD: What’s up next for you guys? You going out on tour?

MM: We are working on festivals and we have tours coming up again the end of February, beginning of March. We are going to the Southeast again through Huntsville, Houston and then New Orleans, Atlanta, Memphis, Jackson, Missippi, etc. We are playing the Wakarusa Winter Classic thing here at the Parish which is sort of a battle of the bands type deal. It’s kind of rough; all the bands are so awesome and they are all our friends. We will be playing after Les Claypool at Stubbs at the end of March. Then in April and May we have a month-long tour out to the west coast and down through Colorado.
AD: Are there any new recordings?

MM: I think we are just in a new song writing mode right now. Josh and Chris historically are the most songwriters in the band. They start it up and they put a few Legos down and then everyone adds Legos and makes the big sculpture. There is a lot of collaboration and group writing.

AD: During a gig do you always use a set list or do you improvise depending on yall’s mood?

MM: Its definitely based on mood most of the time. If its a big show, sometimes we’ll run through the entire set front to back like a Broadway play or something. But then other times it does become improvisational in the fact that someone is not feeling up to playing a certain song when they see it coming up in the set list next for whatever reason and it gets 86ed and something gets filled in. That set that we practice in the practice room will never be the same as when we play it live and that live set will never be the same as we played it that night. Point A to point B is always different. It might be the same songs but 50% is definitely improvisational. We can read each other so well that if one person adjusts we can all pick up on it. ***