My Action Fix with Wolverine 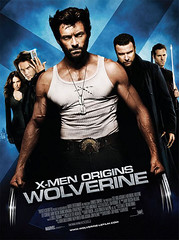 I know lots of people have been waiting for this film to come out for months. Long time fans and newbies alike–this is your chance to see where the Wolverine came from and how he became Weapon X all jam packed with ass kicking action! I often wish that we the viewers could see more of the carnage a guy with blades on his knuckles could inflict but have to remind myself that this is for kids, too. Boo. Although there’s not much bloodshed, the fight scenes are still intense enough for me to keep shifting around antsy in my seat. It was also fabulous that they finally brought in the Gambit character, played by Taylor Kitsch of Friday Night Lights fame.

All in all, this movie was great for everyone. Just enough violence and action for the men, and enough hot bods for the ladies, courtesy of Hugh Jackman and Ryan Reynolds as Wade Wilson/Deadpool. I definitely recommend taking the time to check this out at the theater for the full effect. And stay throughout the credits for a small taste of what may come.