Mr. Herrera and his band of all star musicians will be visiting Austin City Limits music festival on Saturday afternoon at 5:45 bringing both virtuoso talent and high energy Cuban dance music to Austin. I had the opportunity to speak with this man who has a personality that is instantly engaging, energetic, yet relaxed as if sitting on a veranda one steamy Havana afternoon. 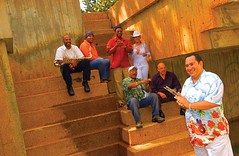 Austin Daze: Could you tell us a little about your background and musical path?

Nachito Herrera: I am originally from Cuba. I was born in a little town southwest of Havana. I started to study piano at the age of 7 with a concentration on the classical styles of the great composers. I was hearing many things as I grew up. There were many influences. My dad was a jazz player also. At the age of 16 or 17 I became interested in the world and in the traditional Cuban music. I began to think about it and began to take classes and play with my father. The rhythms and the music really interested me. At the age of 23 I became the musical director of the Tropicana Orchestra in Havana. (The Tropicana is the premier club in Havana. It is rich in musical and cultural history and has been the launching point of Cuban music to the world.) As musical director I had the chance to play with many of the worlds best musicians and to work on my music. In 1996 I had the opportunity to play with Ruben Gonzalez and Cubanisimo and to really develop everything I was learning about Cuban music. We were very traditional Cuban music. We played all the styles, Cha Cha Cha, Mambo, Rhumba, and so on. We traveled the world promoting this music. It was an incredible experience. We played Austin and had a great time. There is a big Latino and Cuban community down there. We had so much fun playing over there. I have a lot of friends and am really excited to come back with my band. We have an all star band with members of great Cuban bands and our trumpet player was the lead trumpet player for Carlos Santana’s band. With all my friends down there I hope they like us. We are going to play a lot of different Cuban styles and Latin jazz.

AD: How long have you lived in the U.S.?

AD: Are the members of your band from Cuba?

NH: Yes, they are all from Cuba but have moved to the United States. They have played in some of the best bands and traveled the world. It’s great to have them here.

AD: You live in Minneapolis and play there often, what is the scene there?

NH: I play regularly at the Dakota. We are very lucky. The Dakota has become one of the most important jazz clubs in the whole country. It is big and really beautiful club and the community really supports the music there. It’s a great room. I have recorded a wonderful album there, Dakota Live.

AD: Is ACL a part of a tour that you are doing?

AD: So, ACL is kind of a premier for this project.

NH: Yes, yes, we are very excited to show Austin what we are doing. It’s going to be a really high energy show. I wish we had longer to play, but hopefully we will be able to play more soon. We are playing a couple of shows at the Dakota then drive to Austin, so I think the band is going to be really tight and ready to play. My family is very excited, too. My daughter is part of the band. She is singing. My wife is working with the band and managing things. I am going to be traveling with the whole family. I have been telling my family about how good the people are in Austin and we are all looking forward to visiting and to play some really good Cuban music. I just want to say to all the people in Austin that we have been working really hard to put together a really good Cuban show which is going to be really fun and high energy. We look forward so much to seeing you and have a beautiful day.