Austin Daze met with Belleville Outfit on a warm, clear day at Threadgill’s to talk about what they have been up to and to find out what makes them tick. The band had just come off the road and was happy to be back home in Austin. The band clearly has a lot of fun together playing, joking, and fooling around. 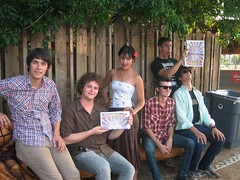 AD: So where did you get the name “Corn dog”

CF: Thats a question for the ages.

RT: It was given to him by Jon and I one sunny day in New Orleans, Louisiana.

JB: He was wasted, and walking down the street with big old brown shoes. . .

RT: No, I don’t know where it came from, he is just a corn dog and will forever be a corn dog, I mean look at him.

RT: Laughing. He showed up at my house with Jim Beam bottle about two hours ago.

AD: How did the band get together?

RT: You want me to take that one Marshall? Marshall and Jeff and I grew up playing in the Deschamps band out of Spartanburg, South Carolina, named after Champ Hood. It was right after Champ died. It was Marshall’s brain child. He knew that Jeff played bass and I played some guitar so he called us over to his saloon room and made us start singing songs. We had never sung anything before, so that was kind of a slap in the face. Anyways, that band kind of got started and we were doing mostly covers of Uncle Walt’s Band, then Marshall and I started writing. The DesChamps put out an album which did OK around the south east. High school was over and Marshall moved to Austin to play with Tony Price. I moved to New Orleans and met Jon and Connor at Loyola. They were studying music. We started playing around town without a name and playing with whoever, but it was the three of us at the core of it. We had an offer to play a festival in North Carolina called Merle Fest. We didn’t have a name for the band so we sat around with a few beers and came up with the Belleville Outfit. One, because we were playing a lot of Django Reinhardt tunes, number two, we were nodding to New Orleans because “belleville” means pretty city, and is an old Django tune. Anyways, we went up to the festival and I called Marshall and Jeff saying “we need a fiddle player”, so we decided to ask Phoebe to do it and Phoebe said yes and so here we are. 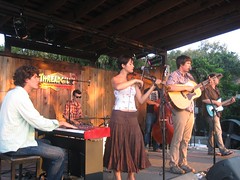 RT: Hey, you guys weren’t going to tell it, don’t make fun of me!

AD: You guys are big fans of Uncle Walt’s Band, and Marshall is family.

MH: Oh, hard to say. In a deep southern accent

AD: Having incorporated Uncle Walt’s songs into your repertoire…

RT: “Repertoire” In a French accent

PH: They are tough songs to learn so they are good for chops. They are beautiful lyrically and, I don’t know, they are almost the best you can get.

JB: David Ball was my bass teacher for about four years. All from the records and recordings.
“Was that a real note there, or something” so I just played everything from the records.

AD: Had any of you met members of Uncle Walt’s Band, before they passed away?

JB: I met champ, but I didn’t really get to talk to him, I was just like ( mimics bowing in homage). I was star struck.

RT: We got to play with David a little while after we started the first band.

AD: You have been characterized as Gypsy, Swing, Traditional. What are your influences?

JB: We listen to a lot of that stuff.

JB: We have a bad Ray Charles habit.

RT: Bad to the bone.

JB: We listen to a whole heck of a lot of things, I mean I listen to a lot of Widespread Panic from time to time. Bela Fleck and Flecktones, thats what we used to listen to in high school in the car, in the driveway. All the time.

RT: At three in the morning. Laughing

JB: While Mom was asleep.

PH: You know the expression “You are what you eat,” well you sound like what you hear. Whatever you listen to your whole life…

RT: That was great.

JK: That was beautiful.

PH: Oh yeah, it was poetic, right? But really you are! People turn you on to new types of music and you listen to it and are influenced by it. I listen to a lot of Billie Holiday growing up. I listen to the “Stand By Me” soundtrack a ton and I realize I am influenced by a lot of bop 40’s and 50’s vocal harmonies and stuff.

JB: Yeah, I grew up with my Dad like that. He would always have Magic 95.1 out of Charlotte, NC playing the oldies. “The Leader of the Pack, vroom”

RT: I guess it was our parents steering us in the right direction at some point.

CF: Except for Jon, who listens to Jimmy Buffet and CCR.

AD: What are your influences Jon?

JK: Oh, man. Well, a lot of blues. Muddy Waters and jazz. My Dad’s a bass player so, people like Thelonious Monk, Chick Corea. A lot of Piano players.

AD: Recently you guys have had a lot of success, how do you think that happened?

RT: First off I would like to know what a lot of success is?

RT: I think we had some great opportunities at the beginning before we even knew this is what we were going to be doing.

PH: The whole band moved to one city to play in the band. I think thats a big part of it.

RT: Its the dedication. Everyone gave up the other things they were doing and said alright we are going to this. No one is doing it half-ass.

RT: Marshall has the best attitude of all.

AD: You are headed to South Carolina to headline your own festival at the Music Camp. What is the Music Camp and how long has it been happening?

RT: It was started about 10 years ago by this guy who had a farm in the country, but he kind of drowned in his own expenses. When the DesChamps were breaking up we did a final show out there and had a lot of fun. Thats where the festival started about 4 years ago and we have been doing it ever since. We have a great lineup this year including Shane Pruitt, a kick as blues guitar player and The Green Cards. Tony Price did it our second year.

PH takes the recorder and begins to interview Marshall.

PH: You meet a lot of girls?

PH: What do you think about Champ Hood’s playing?

PH: What do you think when people say you sound like Champ?

AD: You have just released your album, whats it called?

RT: Its called “Wandering.” There is a tune which Connor and I wrote called “Wandering” and it seemed like an appropriate album title because we were doing quite a bit of wandering around. It has twelve tracks, a good mix of songs.

PH: We have been staying real busy. Last summer was a busy summer and this one is too.

Belleville is hitting the road this summer and will be back for the ACL festival.