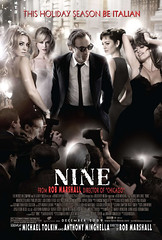 As a film critic, you try and approach each film from an analytical standpoint-finding an angle or thread for which you might build a cohesive (and if lucky, coherent) observation about the content in question. Armed with pen and notebook, it was with this sensibility, that I attended a screening for Nine last week. In the hour and a half that followed, I wrote only this: “I can’t come if you don’t tell me where you are.” It was a line spoken by Guido Contini’s wife, the brilliant Marion Cotillard near the beginning of the film, a line that proves to be particularly poignant for her character’s journey (one of the few full believable ones) back to herself, and she is a stand out, elevating her role with grace and skill. The blank pages that followed my one liner are an admission that this film did my critic sensibilities in and turned any attempt at sophisticated observation into a pile of over-excited, teenage-drooling, mush. Was it lust or love? A week later it’s still hard to tell. So far the signs: the giddy anticipation of its release date; broad tingling smiles every time I see the trailer; singing lines from “Be Italian” and “My Husband Makes Movies” while cooking, cleaning, whatever-ing; swooning parental like-pride for each interview with one of the cast members (Penelope’s on Oprah! Nicole’s on the Today Show! They’re all on Larry King!); cheers when they announced the Golden Globe nominations for best actress, supporting actress, actor, film, and original song.

Then there are the weightier indications that perhaps the affair would not last. Sitting down to write this review being the most evident. Removed from the dizzying eye candy and infectious sweep of the whole thing I wondered, what was the plot exactly? Singing, dancing, and looking gorgeous yes, but a convincing portrayal of love lost on everybody’s part whether it be for themselves or the man/child genius director in question? Not so much. Penelope’s Carla seemed legitimately distressed and Marion, as I said, was legitimately moving. But Kidman’s character entered too late to matter. But then overall some of the dialogue was smarter than the musical and rearranging some of the numbers made more sense. But the whole ending seemed to completely unravel, oh but that last number was glorious! But…but…but. It’s a film full of them. But what do you expect when the thing has seen so many incarnations? Speaking of which, I will say with certainty forget the Fellini comparisons. You’ll be miserable. And as for the musical comparisons, you can if you really find it necessary.

Or you could enjoy the thrill of “living in an Italian film” (well, by way of America of course).  The cast and crew clearly have and that’s the brilliant sell of the thing.  As Liliane La Fleur, Judi Dench speaks for everyone involved when she sings, “What do we want?” Laughter “What do we want?” Love! “What do we want?” Dreams! How can you not want it too? It’s a bit of a glamorous trap:  reject the film and in some way you are essentially rejecting the very notion of wanting to be alive albeit in that laughing, loving, dreaming sort of way. It’s a film based on illusion based on the life of the people who live in illusion and your commitment to that illusion should be decided before you even dare to enter the theater.

On a separate note, this is my first film as a member of the Women Film Critics Circle, a role I accept with both excitement and trepidation. My fellow colleagues have a tremendous understanding and articulate voice when it comes to the roles of women in film both behind and in front of the camera, something I have not regularly thought specifically about. Until now. With respect to Nine, my initial reaction was like my initial reaction to the film–surfaced. These women were for the most part ridiculous–used, played with, throwing themselves at a man that didn’t deserve it. In the week following, as the film lost weight, the women who starred in it gained it. It’s an all star cast of well, stars–successful, talented actresses who have a handle on their lives, careers, relationships and whatever else, Nine manages to celebrate the more important second layer even while playing, for most of them, the opposite on the first. They are proud of their roles, be it whore, groupie, or prostitute, diva, but more obviously the opportunity to be a part of this film, the chosen ones so to speak, as leading women in their field. A fact, I’ll happily celebrate along with them.