Nite Jewel is touted as one of SXSW 2009’s Top Ten Acts to Watch.  Austin Daze got to have a little chat with the star that’s making recording on an eight-track cassette recorder cool.

AUSTIN DAZE:  What made you pursue this particular sound? 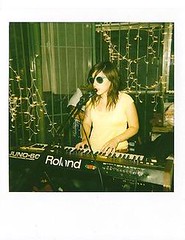 NITE JEWEL:  As a result of being isolated and broke.

AD:  Who are you most heavily influenced by?

AD:  Is it true that you record solely on a portable 8-track cassette deck?

AD:  How did you and Emily Jane get involved with each other?

NJ:  We did some art projects together and I wouldn’t leave her alone because I thought she was really cool.

AD:  So you’re a composer, songwriter, multimedia artist, AND a philosophy student?  How do you manage?!

NJ:  These tours in New York and Austin are sandwiched by midterms and I’m going insane!

AD:  I read somewhere that if you were putting out music in the 80’s you all would be mega stars.  Do you think there is any truth to that or is it bullshit?

NJ:  I see that attempt to re-contextualize my music as a thing of the past as a LAZY listen.

AD:  “Artificial Intelligence” is a very interesting video.  How on earth did you come up with that?

NJ:  The director Travis Peterson thought up the idea.  I just went along for the ride.

AD:  Do you have big tour plans after SXSW?

NJ:  As of now we are touring Europe in September.

AD:  Anything you want to do while in Austin?