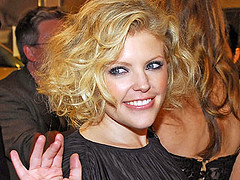 Dixie Chicks front woman Natalie Maines threw a Halloween party at her home in Los Angeles and guess who showed up?  Go on…..guess.  If you guessed George Bush, you are sadly wrong, although that would have been a sight to see.  If you guessed Michael Jackson, you must have cheated, but kudos to you anyway.  He would have been one of the last people I thought would show up at a Halloween party since he is such a recluse.  With Michael Jackson being a popular way to dress up for Halloween how can one be sure it’s the real king of pop.  I believe that is why the DJ at the party pulled out the tried, tested and true ‘Thriller Test.’ Only the real Michael could breeze flawlessly through the zombie dance sequence.  Why is this news relevant?  Well for one, Natalie is a local Austin home owner.  And secondly, and quite frankly more importantly, it seemed like a great segue to link to this video that I can’t get enough of, of Mayor Will Wynn doing a portion of the thriller dance.
Charmed 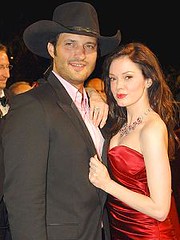 If you wondering if director Robert Rodriguez and actress/muse Rose McGowan were still engaged, then lay your wonder to rest.  As of October 18th the couple is still together.  Rose confirmed to reporters that they are planning their wedding for 2009.  Rose met (the then married) Rodriguez on the set of the movie Grindhouse in 2007. Besides inheriting five step children with the marriage, Rose will also gain access to his amazing home in Austin.  The couple is currently at work on the remake of a film titled Red Sonja.  Rose is also in talks to play the role of Linda Lovelace, the legendary ‘Deep Throat’ star, in a movie biopic.

LET'S PRETEND WE ARE...PRETENDING
Next