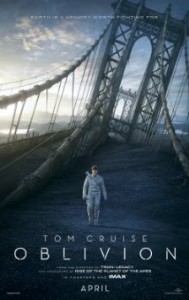 Whenever I see a big budget, high effects, action packed movie I immediately think of mid-summer. The race for the unofficial title of Summer Blockbuster has been going on for decades now, as each year studios release movies that promise to blow away the entire crop of movies that came the summer before. It’d kind of a tradition, at this point. Every year delivers some combination of super heroes, alien invasions, and space travels designed to delight the masses with slick effects, beautiful stars, and high budget thrills.
Oblivion, the latest vehicle for Hollywood’s favorite ageless eccentric, Tom Cruise, has all the makings for the kind of thrill ride audiences crave in their summer releases. There are spaceships and aliens and post-apocalyptic wastelands and explosions. For all intents and purposes, this is the type of movie normally reserved for your Fourth of July weekend dollar; so when I found out it was scheduled for release in late April I immediately had to ask myself: why?
It’s no secret that the business of show is just as much a business as any multinational, billion dollar corporation is. The schedule of release is a carefully mapped out and planned process involving all sorts of metrics and market research designed to optimize their obtaining of your hard earned dollar. It’s a science, for sure, based around studio estimations of what they think you’ll want to see on what weekend. That’s why most big budget spectacles open on long weekends, when the majority of the movie going population has time to kill.
And Oblivion is a spectacle, that’s for sure. Cruise plays technician Jack Harper, one of the lone inhabitants of Earth after a long and tragic confrontation with a mysterious alien race. The world is a wasteland, unrecognizable from the world we know, filled with pockets of radioactive areas as a result of our launching of nuclear missiles. Though we are told that humans eventually prevailed over their interstellar assailants, the price of survival was our home. Most of humanity has been relocated to Titan while Jack and his partner, Victoria (played by Andrea Riseborough) are tasked as a sort of post-apocalypse cleanup crew.
The habitat on Titan is dependent on a series of giant fusion rigs that use the water of the oceans to generate power for the struggling settlement. Despite having won the war against our invaders, pockets of alien enemies still exist on our planet and they have every intention of destroying what they can before dying off. As a result, the rigs are protected by an armada of drones that systematically destroy any hostile forces. As technician, it is Jack’s responsibility to keep these drones running.
Already, this plot sounds as though it has everything you could want in a summer time escapist release. Cap this off with some impressive effects and you’ve got yourself a genuine Memorial Day weekend blockbuster. The problem with a summer release, however, and the most likely reason for its April release? It’s just not that good.
That’s not to say it’s a terrible movie or anything, because it’s far from that. I’ve no doubt that this movie will make its money back and then some on ticket sales and it will most likely be generally well received by the movie going public. It may not be a good movie, but it’s still a fun movie that more or less delivers everything you’d expect it to. But it never quite does anything to blow you away.
It’s a fun movie to look at, no doubt. There are some intense moments with Jack piloting his “bubble ship”, a sort of futuristic helicopter that allows Jack to gallivant off from his home base which floats somewhere over the eastern seaboard, as well as some requisite explosions (a necessity for all summer blockbusters). But it really isn’t anything we haven’t seen before.
Which is kind of the perfect way to sum up the experience of watching Oblivion. It’s fun enough, I guess, but it’s nothing you haven’t seen. The plot itself is derivative and predictable. I was told beforehand to avoid any spoilers for the movie and I obliged but as the film progressed it became pretty clear what was going to happen before it happened. The twists and turns I was told to anticipate were pretty straight forward and if you are actually impressed by the shocking reveal then I have to posit that you weren’t paying attention. Even the normally amazing Morgan Freeman is a little bit bland as the leader of a small pocket of humans that have supposedly resisted both the invasion and subsequent exodus of Earth.
As I said, I don’t anticipate Oblivion to be a box office dud. The star power alone is more than enough to keep the masses entertained for a few weekends. But it’s pretty clear that this movie won’t be setting any records. If anything it proves that the machinations of the Hollywood money making system know what they’re doing. Like most April releases, this movie is one to see and then immediately forget about.

Hardproof and Rebirth Brass Band at The Belmont
Previous