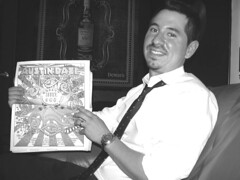 The latest album from collaborative musicians, Martín Perna (Antibalas, frequent collaborator with TV on the Radio) and Adrian Quesada of Grupo Fantasma is a latin-fused psychedelic experience. In addition to being exceptionally talented they seem to live off of a limitless supply of energy. These guys live, breathe, eat and sleep music. We sat down with them to find out how they keep it all going.

AUSTIN DAZE: you guys have so many projects that are doing so well. We have to ask, did you sell your soul to the devil to make everything work out so well?

ADRIAN QUESADA: I was just talking to someone the other day about that. There were times when the band has days off and I go and play with other bands. It’s stressful but it pays off. Nothing has happened over night and I still don’t feel like everything is like super successful but it’s getting there. It’s something that has happened over the past 10 years. With Ocote, before we ever got picked up by a label our CD had been out for a year.

MARTIN PERNA: I have not sold my soul…yet! Fortunately the music has been the result of many good friendships forged over long hard times. I wish I were as successful financially as I was as far as making good stuff.

AD: How did you two hook up?

AQ: Me and Martin had originally met in 2003. My wife had moved to New York for a year and it was right around when Antibalas had put out their first record. I was really into it and it turned out that her roommate was really good friends with them. So I just got in touch with them. Then I was on tour through New York and did a recording session with Martin on a song—this was years ago—and then we stayed in touch and kept trading ideas through email. He was on a trip to Mexico, he had converted a Mercedes Benz to run on vegetable oil and he stopped on the way down and we recorded the first song of the CD. On the way back his car broke down right at the border so he made it all the way to Austin and then he was stuck here for 3 weeks trying to find someone to fix the car and we just started recording the first album. From there we stayed in touch and he moved down here and that’s been it ever since.

AD: Whose idea was it for ya’ll to start recording? 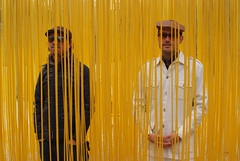 AQ: Originally I think I was the one that tracked him down to record. He had already recorded some of the songs under Ocote Soul Sounds—there are four or five tracks that he had already recorded in New York. When he sent me that I loved those songs and I sent some stuff that I had been working on. It was the first day that we recorded here in Austin that I told him we should make this album. That’s how it happened.

AD: Adrian, I never knew that you played so many instruments.

AQ: I can get by on most instruments. I started playing drums when I was in high school in addition to guitar and I can get by on keyboard and drums—enough to record but not enough to actually perform. I have a lot of different instruments at home and like to have fun with that for sure.

AD: There are a lot of different contributing artists on this album. How did that come about?

AQ: Martin and I do as much as we can and then it’s nice to bring in others. There’s stuff that wasn’t our strong point and we wanted to get a group vibe on some of the other stuff. Some instruments like percussion, it’s always nice to have a real percussionist on there rather than try and get by on the instruments. A little bit was having a sense of community by having our friends on it, a lot of it was having people do stuff that we couldn’t do ourselves.

AD: Is there anything you tried that didn’t work?

AQ: There are some songs that didn’t make the album and there are definitely some songs that we scrapped. We work on stuff so much that a lot of it doesn’t make the album. We started the second album before the first one even came out. We turned in the first one and just kept recording. We probably have a whole album’s worth of stuff that we are trying to get out by the end of the year. Since Martin moved to Austin we’ve been performing as a band more and we are starting to get more ideas from the band itself and making it more of a band than just me & Martin. It’s a whole different dynamic now that we have musicians giving their input.

AD: Tell us about the new album.

AQ: The new album is called the Alchemist Manifesto. It took a long time to get all the ideas together and get something that sounded cohesive and like an album. The first album sounded like a soundtrack to us, it was supposed to be a soundtrack to this fictitious movie but the second one we took the idea of The Alchemist—taking everything around you and just making something out of it. It applies to everything in life; the idea of taking everything in abundance and making something special out of it.

AD: Is this the first time on vocals?

AQ: It was interesting, Martin was the one that decided to give it a shot. It’s a direction we are heading in little by little.

AD: Did you know that’s what you wanted when you set out or did the title come later?

AQ: Both albums came about by us finishing the album, listening to it over and over and asking, “What does this sound like?” It sounded like a movie to us again but we didn’t want to use the same concept. Martin is the one that came up with the concept for this one.

AD: How do you manage to be involved in so many individual groups? How do you find the time?

MP: I get to play on a lot of different records, and different projects, but a lot of them I just drop into the studio and record. The main groups I’m involved with—Antibalas and Ocote Soul Sounds aren’t touring much, so that gives me more time and space to make records which I like more than traveling these days.

AD: Ocote seems to be a creative outlet. How do you switch on and off between the different formats you are involved in?

MP: It definitely is. It is a lot more open and freer than Antibalas, and since Adrian and I are in the same city, we get to meet up more often and just flesh out new ideas. With Antibalas being up in New York, I am less involved in the creative process than I’d like to be. But I get to go to Barton Springs and eat banging Mexican food every day, which is well worth it all.

AD: How do you manage to get it all done?

AQ: I don’t know. Besides band and my family I have no life; I have no time for my hobbies. It’s my everything.

AD: Can you tell readers about the Ocote Soul sound on this new album.

AQ: It’s similar to the last one in that it’s cinematic and psychedelic. A little hazier than Antibalas and Grupo Fantasma—it doesn’t hit you over the head as much as a big band does. This one has a little more thump to it—a little more bottom heavy. We did some programming of drum beats which we didn’t do on the last one. The music we make tends to be psychedelic and hazy.

MP: For me it is a little bit further down the path of realizing my artistic visions and finding my voice, but definitely not there yet. It is so much fun working with Adrian and listening to all the great ideas that he brings, and putting our heads together to finish these ideas and play them live.

AD: Adrian, what about the new Grupo album?

AQ: It’s actually the fastest one we’ve ever finished. We started it in December. We tried to take as much of a live approach with it as we could. People always said that they like the live approach better than the album so we tried to capture that sound—as if you were in the room with the band. We had a pretty quick turn around which lent itself to recording a lot of it live. At the same time we had a lot of fun in the studio by making it a little psychedelic and have it play like an album from start to finish instead of being just a bunch of songs.

AQ: Grupo is going on tour all summer so that is what is next for me.. That’s as far as I have planned. ***

Paul Green's School of Rock
Next