Odds Are You’re Gonna Love It 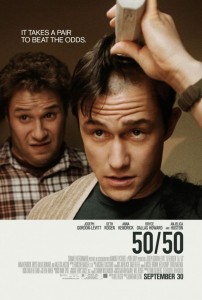 “50/50” is a raunchy comedy/drama that tips the scale in favor of comedy by a ratio closer to 75/25. A “cancer comedy” sounds like a tough sell, but surprisingly the humor hits on a gut level much more successfully than the drama.

Joseph Gordon-Levitt plays Adam, a careful 27-year-old who jogs, eats right, and waits for the ‘walk’ signal before crossing the street — just the sort of guy to get stricken with a rare unpronounceable form of cancer that he’s got only a 50/50 chance of surviving.  Gordon-Levitt is certainly among his generation’s most gifted actors, and this role allows him to play with almost all the colors in the emotion rainbow: affably sweet, insecure, dark, light, vengeful, forgiving, withholding, generous, hopeful and afraid. He can take you there with just a look.

His best friend is Seth Rogen. The character has a name (Kyle) but it doesn’t matter. Seth Rogen plays Seth Rogen. This is both a blessing and a curse. His brilliant timing and off-the-wall asides make for some of the heartiest laughs you’re likely to get in a movie now or ever. Unfortunately, the script relies much too heavily on the “you gotta get laid” buddy character cliché. Rogen persists with this trope for so long into the film that one wonders why Adam would be friends with him. Truly, even the most shallow jerk on the planet would probably give that a rest once his friend is deep into chemo and can hardly stand up. There are some other shades to Rogen’s character that peek through now and again, and we relish those moments.

Adam’s girlfriend is played by the beautiful and talented Bryce Dallas Howard, who offers up another “ice queen” role coming on the heels of her Hilly Holbrook in “The Help.”

Adam’s very young shrink-in-training is played with quirky vim and vigor by Anna Kendrick (“Up in the Air”), whose charms have been largely lost on me until now. Adam is only her third patient and she hasn’t quite mastered the fine art of “spontaneous” comforting physical contact – the shoulder pat, the hand squeeze. Adam lets her practice on him, and their awkward rapport is instantly endearing.

Rounding out the cast is Philip Baker Hall and Matt Frewer as Adam’s jovial and supportive chemo pals, and Anjelica Huston as his overbearing but well-meaning mother.

With such a chancy topic for a comedy, hopes were high that the film as a whole would be bold enough to avoid formulaic plot points. However, it pretty much hits all the beats exactly where and how you’d expect them. It’s the witty dialogue and charming, humane characterizations that provide the surprises.

Director Jonathan Levine (“The Wackness”) knows how to get wonderful performances from the young cast and some unexpected qualities from the veterans. The hip score feels right, and Pearl Jam’s “Ledbetter” is used to sublime effect in the closing shot.

It’s impossible for anyone who has been touched by cancer to watch a movie on the subject without looking for authenticity. Levine makes a big mistake in his handling of Adam’s make-up toward the end of his chemo treatments. The hair on his head is gone, but his eyebrows remain, and the dark circles under his eyes are never more severe than one might expect from a hangover. It’s likely The Powers That Be thought it unwise (in box office terms) to let the handsome leading man look like Uncle Fester, as most chemo patients do for a time. Perhaps they thought it would be too depressing or that audiences wouldn’t embrace Adam if he wasn’t cute enough. Shame on them for that. In a movie that’s meant to take you into the experience of a young cancer victim, it’s a colossal cop-out to avoid the subject of how drastically the outer appearance changes. We would love Adam with or without eyebrows, I promise.

The classic 1983 film “Terms of Endearment” (another cancer comedy/drama) is referenced in “50/50”. This film isn’t that good, but it will make you laugh, and it might make you cry.

"Melancholia": It's headed right for us!
Previous

A Hard Rain's Gonna Fall
Next