Music festivals are a celebration of creative work done all year long. Day in, day out, artists work on new songs, promoters plan festivals, audiences tell each other about the good music they’ve heard lately, until it all comes together in a jubilant weekend like Old Settler’s Music Festival. There’s a few dozen acts booked to play the stages of Old Settler’s, each has a good story to tell. Here’s a few of ‘em.

Jason Isbell and the 400 Unit (Acoustic)
Fri. April 12th, Original Black’s BBQ Stage, 8:30
It’s a special acoustic band set y’all, a chance to see the songs you love in a new acoustic format. The man is on a streak of back to back to back award-winning albums and continues to challenge himself to keep things fresh. Two months ago, Isbell did an experimental guitar set at a Carnegie Hall benefit. In March, the SXSW Film Festival hosted the premier for a new Ethan Hawke movie, Adopt A Highway, with a score composed by Isbell, full of atmospheric double tracked guitars, rather than the tight Americana tracks he’s known for. This April sees the unveiling of another musical identity, as Isbell strips down his electric sound to an acoustic band format for his Old Settler’s appearance. Isbell last played Old Settler’s in 2012, just weeks into his new sobriety, surprising festival staff with a request to keep the green room booze free. It’s been seven sober years now, and each time he sings “I sobered up and I swore off that stuff” the crowd cheers in approval, even those with drinks in their hand. In Isbell’s pre-sobriety time with the Drive-By Truckers, he could step to the mic and turn a dark room darker, with a brute stare like a lit fuse about to go off. Post-sobriety, the intensity remains, his albums are like collections of canaries escaping coal mines and brought into beautiful light. In 2012, no one saw Isbell’s career changes and Grammy run coming. In 2019, what changes are coming next? It feels like anything is possible. Come see history while it happens, live and in real time.

Black Pumas
Fri. April 12th, Bluebonnet Stage, 10:45pm
Over the years Old Settler’s has given music fans shots at earning the “saw them before they were big” badge of honor. That Jason Isbell fellow is an example, playing a low key early afternoon Old Settler’s set in 2012. Last year’s festival breakout act was Billy Strings, a high energy virtuoso winning over a new fan base. This year the odds makers have their money on the Black Pumas, a danceable pysch-soul band, led by vocalist Eric Burton and Adrian Quesada on guitar. Quesada has made a career of crafting beats and hooks, playing with the Grammy winning Grupo Fantasma, and backing up Prince. Quesada’s well-honed skill is on full display here, with Burton’s soulful vocals adding a multiplier effect, making them a likely “next big thing”, at least if music geeks like the Austin Daze don’t over hype them.

Amanda Shires
Fri. April 12th, Original Black’s BBQ Stage, 5:20pm
Post-Flatlanders, Lubbock TX still gives the world musical contributions like Amanda Shires. Shires was a prodigy of sorts, joining the Texas Playboys to play fiddle at 15. Later she earned bad ass status playing fiddle with Billy Joe Shaver of “where do you want me to shoot you” fame. Over a decade ago she added lyricist to her skill set and built a name as a respected singer-songwriter. Her latest album To The Sunset is full of memorable melodies and character studies, and song “Eve’s Daughter” is required listening for anyone wanting to wake up right now. Really, go listen, like right now. Her setlists are full of great song motifs ranging from champagne toasts to tiger paws. Don’t be surprised if her husband, Mr. Amanda Shires, joins in to play guitar somewhere.

Galactic
Sat. April 13th, Original Black’s BBQ Stage, 10:30pm
New Orleans is a festival city, so it just feels right to have the city represented at a festival, especially when the repping comes from late night dance party kings like Galactic. Their time slot is perfect, the final act on the main stage, taking the festival to midnight. After Hayes Carll and Brandi Carlile ply you with all the heartbreak stories you can handle, dry your eyes and let your dancing feet take over with Galactic. Formed out of a musical vacuum in the 90s, Galactic was way ahead of today’s neo-soul scene revival, and they’re still damn good at it. Musical recipe idea from the Galactic cookbook: take the classic Nola street beat, turn the drumming up to eleven, add a wall of sound built from a mix of dirty raw guitar, swirling organ fills, deep bottom bass bombs, then let a saxophone erupt through it all. That’s how Galactic cooks, and holy smoked gumbo, can New Orleanians cook.

Shinyribs
Fri. April 12th , Original Black’s BBQ Stage, 10:30pm
Sun. April 14th, Campground Stage, 4:15pm
For two years running, Austin Chronicle readers have voted Shinyribs as the Band Of The Year (or as Sun Radio’s Kevin Conner calls them: the back to back BOTY). When locals give a band repeat “best of” honors, and DJs coin hashtag slogans for it, you know something special is going on. This band likely needs no introduction, but if you haven’t heard them before, just know Shinyribs gives a master class in how to command a stage. Great songs will be involved, likely joined by a troupe of musicians, singers, and dancers, fearlessly led by the progenitor Shinyrib, who will be dressed better than the Prince of Minneapolis. Two chances to see them, the first on a starry Friday night, the next on a sunny Sunday afternoon.

Paul Cauthen
Sat. April 13th, Bluebonnet Stage, 9:15pm
Sometimes you just need to stand outside in a field in Texas and listen to a Texan sing good songs. It’s why they were born here, and it’s why we live here. Cauthen’s low voice style of country music channels East Texas gospel with hill country twang. It’s all about Paul’s voice, the songwriting, the guitars…expect the real stuff you get with anyone with anyone in the Texas Gentlemen circle of friends.

South Austin Jug Band Reunion
Thurs. April 11th, Campground Stage, 8:45pm
There’s still no jug in the Jug Band, and these days there’s no band either, except for a lucky day or two a year when the band reunites and reignites what made them a local scene favorite in their Aughties heyday. These boys were Americana before Americana was the thing, and though years have passed since forming, they seem the same age, just better at their instruments. A band with multiple songwriters all good at what they do is a rare thing and seeing South Austin Jug Band play is a rare thing. Threadgill’s World Headquarters was their preferred gathering grounds for annual reunion shows, until last fall when Threadgill’s turned off the lights and closed for good. Thankfully Old Settler’s is stepping up to keep this South Austin tradition alive.

Wood & Wire
Sat. April 13th, Workshop, 1:15pm
Sat. April 13th, Bluebonnet Stage, 6:15pm
Old Settler’s still offers the next generation of musicians a chance to pick up some tips from pros working the festival. It’s not every day you can hear Grammy nominated folks like Wood & Wire drop some musical knowledge on you in person. After an early afternoon workshop set, they’ll take the stage for an evening set to display good songwriting with a ferocious and fast live show.

…and more Music
There’s many more bands worth mentioning: Brandi Carlile picked up three Grammys this year and headlines the festival Saturday; Hayes Carll released another great album this spring and takes the stage on Saturday; James Hunter brings his solid soul and Daptone records vibe to the Festival on Friday afternoon; and on Saturday afternoon we see yet another Grammy winner when the SteelDrivers bring their gutsy take on bluegrass to the fest.

See ya out there! 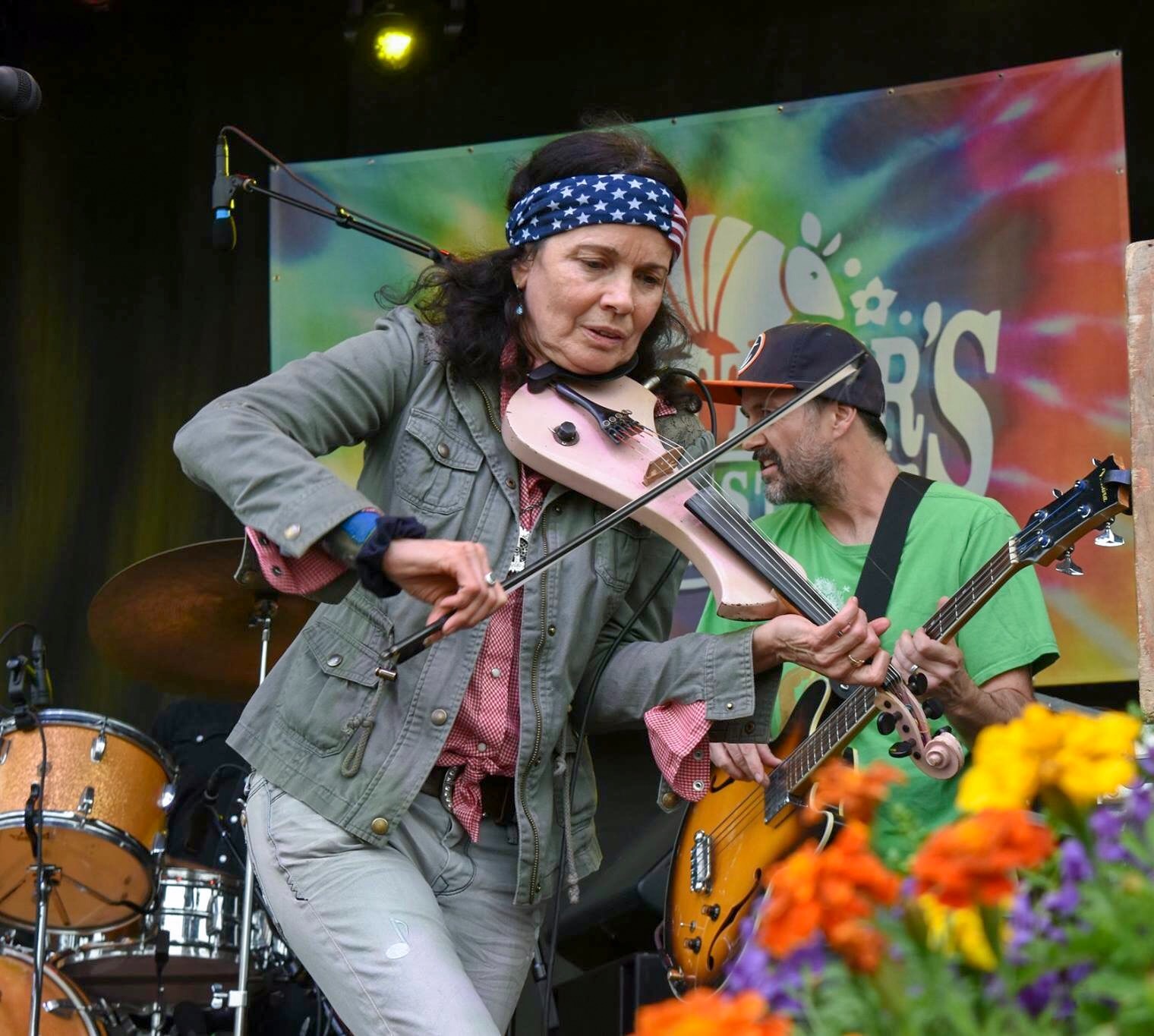