On “The Rum Diary” and Righteous Rage 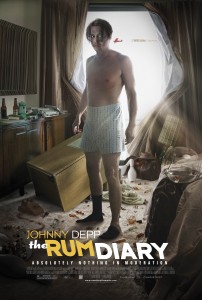 “It will be a voice made of ink and rage,” Johnny Depp intones as Paul Kemp, erstwhile alter-ego of Hunter S. Thompson in this semi-autobiographical account of his pre-Gonzo early days as a journalist in Puerto Rico circa late 1950s.

“The Rum Diary” is a wild, scattered, hilarious, heartfelt homage to Thompson. Depp’s love for his old pal is evident in every frame. The two met in the late ‘90s when Depp was preparing to play Raoul Duke (Thompson’s most iconic alter-ego) in “Fear and Loathing in Las Vegas.” Thompson so approved of Johnny Depp playing him that he allowed the actor to live in his basement for a time. It is said that Thompson himself shaved Depp’s head in his kitchen when it came time to adopt Duke’s receding hairline. During this time, Depp discovered an unpublished manuscript lying around the basement at Thompson’s Colorado ranch. It was a novel written by Thompson when he was a mere 22 years old, but left to collect dust after multiple rejections from publishers. The two men made a pact to get it published and see it to screen.  Thompson died in 2005 before this dream was fully realized. It was Depp who saw to Hunter’s last wishes: he had a 150 ft. cannon built in the shape of the “Gonzo Fist” and blew his ashes to the high heavens along with explosions of fireworks. A more fitting farewell to the Madman of Truth there could never be. And Depp kept another promise as well: he produced “The Rum Diary.”

The film begins as Paul Kemp awakes from a night of who-knows-what debauchery and attempts to ready himself for a job interview. He’s hung over, sporting chic shades and a grim demeanor, with a bogus resume in hand as he tentatively enters the office of surly editor-in-chief Lotterman, played by the always-reliable Richard Jenkins. Lotterman runs a paper called the San Juan Star which caters to upper middle-class white people living the easy life in Puerto Rico, and employs a rag-tag bunch of burnt-out journalists whose ideals were long-since drowned to death with booze and bitter disappointments. Among the fringe elements at the paper are Sala, a seasoned journalist and champion imbiber played with good-humored buddy-essence by Michael Rispoli, and Moburg, a chemically-altered scribe who collects vinyl records of Hitler speeches, suffers serious hygiene problems, and only stumbles in to work on Fridays for his paycheck. Giovanni Ribisi’s straight-faced portrayal of this completely unhinged character is so riotously funny that every moment he appears on screen is a treasure.

Paul makes a few stabs at serious journalism but he’s reined in by Lotterman who believes that the rich whites don’t want to hear about the down-trodden natives. Meaningless assignments settle over him like a dense and debilitating fog until a cool breeze in the form of Sanderson (Aaron Eckhart) blows that all away. Sanderson is a well-connected tycoon who convinces Paul to write pro-development stories that will enable a real estate scheme he’s hatching. With this dubious assignment comes a lot of perks including a shiny red Corvette and a beautiful girl named Chenault (played by the ethereal beauty Amber Heard). Paul is only human, after all, and The Great Compromise sucks him in.

What ensues is a series of bizarre and politically incorrect adventures including cock fights, fun with fire and alcohol, hallucinogens, a transgendered voodoo priestess, and a presumed and thankfully off-screen sexual assault, all of which serve to lay bare dark truths beneath the beauty of the tropical paradise. Paul sees the light by trudging through the dark and this hideous baptism gives birth to his authentic voice.

In the face of corruption and defeat, Gonzo Journalism is born. “I put the Bastards of this world on notice… that I do NOT have their best interests at heart. I will try and speak for my readers. That is my promise. And it will be a voice made of ink and rage.”

The uninitiated may be unmoved, but HST fans will get that ol’ familiar heart swell that his eviscerating wit and searing insight always inspires. The voice which laid America’s foibles bare with uncompromising truth for over four decades is resurrected with fierce conviction and loving care.

Director Bruce Robinson (who helmed the cult favorite “Withnail and I”) captures a gloriously Technicolor island and its seedy underbelly with vivid detail, and he knows how to bring out the best in an ensemble of gifted actors. Though his script is scattered and meanders at times, there are flashes of brilliance as the truth behind the façade of the American Dream is revealed through Paul’s eyes. One must suspend disbelief as Depp (age 48) plays what is essentially the role of an innocent. What he may lack in age-appropriateness, he makes up for with dead-pan humor and some of the most comic fear responses ever captured on film.

Whatever the flaws of the film, this reviewer is, frankly, happy to overlook them.

In today’s America, “the Bastards” have won utterly. With bought legislation and legalized corruption, the entire financial system has been bankrupted, and that’s not the worst of it. The Bastards, through trickery and sleight of hand, have convinced the victims of their crime to ask for more punishment. No regulation. No consequences. No help for the poor, but wads and bundles and truckloads for the filthy rich. Any suggestion that enough is enough faces the charges of “SOCIALISM!” while the crooks sneak away with all the money us suckers are forced to throw into the pot. Meanwhile, there’s not an un-bought politician in sight and no one around to speak for the people. When a few dare to speak for themselves, the Bastards use their media puppets and bought politicians to convince the complacent (COMPLICIT) masses that the few, the proud, the awake are nothing but a bunch of dirty hippies. The brainwashing of America is complete and we need someone like Hunter S. Thompson to slap us the fuck out of it. Trouble is, there is no one like HST. Never was before and never will be again.

But we have the work. And the work has champions determined to give it new life.
Kudos to Depp and company for this labor of love.

Some may enjoy “The Rum Diary” as simply a wild ride and a vehicle for Depp’s considerable comedic gifts, and it most certainly is that. It’s a hell of a lot of fun. But it is more, much more than that. It’s a call to arms, with words as weapons. “Can you smell that?” he asks with a wicked grin spreading across his face. “It’s the smell of ink.”

Pen to paper. Feet to the streets. Rage on. Rage on. HST forever!

36 Hours in a Meltdown
Next