Only Flashes of Something Special 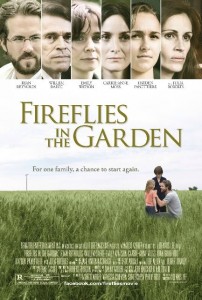 “Fireflies in the Garden” is a semi-autobiographical family drama from first-time director Dennis Lee, centering on the strained relationship between a sensitive son, Michael Taylor (played as a child by Cayden Boyd, and as an adult by Ryan Reynolds), and his difficult relationship with his overbearing father (Willem Dafoe). With strains of “The Great Santini”, the film aspires to be an affecting memoir of family dysfunction but falls short due a scattered script and untethered performances.

The story begins with young Michael in the backseat of a car getting “what for” from his Dad for having lost his eyeglasses. Up front, his mom (Julia Roberts) defends the boy as the argument continues to escalate. Eventually, young Michael is tossed out of the car onto the side of the road to watch his parents drive away as rain begins to pelt from a merciless sky. The boy reaches in his pocket and pulls out his glasses that had been there the whole time. Here we see the basis of the strain between father and son – father pushes too hard, but the son also goads him, delighting in perhaps the only control he has: the ability to enrage his father.

There are two timelines: the past where Dafoe’s character becomes more abusive and Michael’s refuge is an increasingly close (perhaps too close?) relationship with his young Aunt Jane (played by feisty and fun to watch Hayden Panettiere), and the present where the family gathers for a funeral and deals with issues that have lain dormant all these years.

There are an overly ambitious number of subplots, most of which remain frayed and unsatisfying. For example, Michael’s estranged wife (Carrie-Anne Moss) shows up for the funeral but seems to appear only to participate in one scene that provides some comic relief. Throughout the rest of the movie, her presence is given no meaning at all. Michael’s relationship with Aunt Jane as an adult (Emily Watson) still has a hint of sexual tension that is never explored or explained, but she’s so angry and suspicious of him the moment they are reunited that one gets the feeling the heart of this subplot was gutted in editing.

Perhaps the most troubling subplot involves the film’s biggest star, Ms. Roberts, whose character offers relatively mild protests regarding her son’s abuse but allows it to continue anyway. Sure, she’s there to comfort him after the fact but that should not be enough to endear her. A good mother would put a stop to it, not just show up later to pat the boy on the head. Sympathy for this important character is lost in scene one and never regained. In fact, the only time she threatens to leave her husband is when she suspects him of having an affair. She’s got the guts to leave over another woman but lacks the courage to leave in order to protect her son? Sorry, I found this character uninspiring in every conceivable way.

There are more subplots (too many to list) involving the impressive ensemble but none really resonate, except for Michael’s relationship with Jane’s kids, who are technically his cousins but more the age of nieces and nephews. Here, Reynolds shines with comic timing and good-natured wit. He fares the best among the cast, and after a tough year (“Green Lantern”, “The Change-Up”), he deserves kudos for that.

The film’s episodic structure creates emotional distance but is secondary in concern to the director’s penchant for melodrama. Emotional outbursts can work in a film when they are earned through consistent story-telling and characterization, such that when they finally boil to the surface it feels like an inevitable culmination of the moments that preceded it. But with fractured storylines and sketches of characters, such moments tend to feel forced.

It is impressive (and curious) that this first-time helmer was able to get such monumental talent involved in his project. Unfortunately, this feels like one of those cases where the author/director was too close to the material to be able to sculpt it objectively.

Shot in Austin, Bastrop, and Smithville, mostly bucolic scenes are captured with graceful cinematography by Ms. Roberts’ hubby Danny Moder, and this lends the film a good deal of polish.  Ultimately, “Fireflies in the Garden” takes on the feel of a glorified Lifetime movie, with only rare flashes of something special scattered here and there – a lot like fireflies in the night sky.

Buddy Guy at ACL-Live BY M.C. Parsons
Next