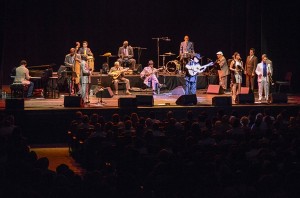 d the Daze. Unlike our recent adventures, we were back with the VIP treatment and were escorted to awesome left center seats 5 rows back…this was more like it! Russ was grinning as we were close enough to peg every member of the band with a tennis ball if we wanted to. The band was made up of 13 musicians and 4 singers that came off an on. The band leader was a trumpet player named Jesus who wore a platinum shiny striped suit that only cool black guys can get away with wearing…also fronting the band were two back up singers. One of the singers was a squirrely little Cuban guy with a white suit and bright blue shirt and matching tie. The other singer was an Amazon shapely lady that had giant boobs and butt and sported a giant bleached blond pony tail pulled out the top of her head…they both would break out in the coolest dance moves ever! The rest of the band were beautifully dressed in suits and seemed to average about 75 years old in spite of being sprinkled with a few guys in their 40’s. The sound was perfect and the music was a pure delight…dance-able, infectious, rhythmic, and sweet! A guy in all black with a Cowboy hat came out and did several songs and played beautiful guitar solos….later an ancient Lady wearing a bright red sequined dress sang in a clear strong voice and got the crowd going. Omara Portuondo, who began her career years ago at the famous Tropicana Cabaret controlled the room. This show was a visual treat as well as an organic pulsating aural pleasure…the dancing…the whole package…the crowd loved it! Even the elderly ushers were attempting to Salsa dance! Near the end of the show beautifully dressed couples started coming up the aisles and a dance broke out…what a nice way to end the show! Great music…beautiful harmonic singing…lovely dancers…a magical night…everyone left smiling.  Another night of live music in Austin.   Ken Miller

METALLICA: THROUGH THE NEVER INTERVIEW WITH KIRK HAMMETT
Previous

New poster by Amy Kantoff… Plz come out
Next