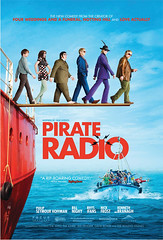 “Rock and Roll will live forever-but can it float?”

If writer/director Richard Curtis has anything to say about it, the answer is a bursting, “Yes!” evidenced by his latest film, Pirate Radio. It’s an unapologetically uplifting comedy about a group of 1960s rogue deejays determined to deliver forbidden music to 25 million people. Listen to some of the last broadcasts of the ships for which the story was inspired and you might come to a different conclusion. Early critics of the film accuse it of being a “too sugary” and “too sweet” account of an event that in the words of Robert Daltrey of The Who, people were “a lot more pissed off” about. To say that Curtis delivers a staunchly sunnier version of the events than many remember it is an understatement. But sitting down with Curtis last week in New York I came to understand why it couldn’t possibly have been any other way.

Richard Curtis entered the Waldorf Astoria press suite with a bounce. Full of energy, his enthusiasm was particularly jarring against the tired, dusty furniture of such an antiquated hotel. Our introduction elicits a firm, “Excellent” from his smiling mouth, this in specific response to the spelling of my name. I sit, cautiously observing the light sprinkle of good fortune at my parent’s choice in letters as it floats to the floor around me. Within minutes of the interview, it becomes apparent that this sprinkling was just the beginning; that this man has “optimism” pulsing through his veins. From his response to the actors being seasick during filming, “I’m an optimist, I never see the bad things in life” to the inspiration behind the film, “I just love the high spirit and optimism of 60s music”, a seemingly endless supply of this “optimism” remained perched on the tip of his tongue, casually catching a ride on the back of every answer. Considering today’s social, economic, and political climate, using “optimism” the way he does is about as casual as dropping the f-bomb in church. But spend 20 minutes with Curtis and it becomes evident that he is not only fearless about broadcasting his good cheer on movie screens across America, he is down right committed to it.

The audacity of such an outlook. Two wars, an economy in the tank, unemployment, divorce…I mean, now? On behalf of the general population, I had to ask, “How can you?” He stops. “I don’t know,” he says, searching. Could there be a crack in his sunny armor? And then, eyes warming, he says this:

“I think it’s easy to underestimate the level of good things that happen in the world. I’m aware now of being in conflict with people who believe that the things that are least happy are most true, but I don’t agree with that at all. So I’ve made films about love and millions of people fall in love every day in every city in the world and my movies are called unrealistic and sentimental. Somebody makes a move about a soldier who goes AWOL and rapes a woman in her flat before killing her. That’s only happened twice in history but for some reason that’s called searingly realistic and true. I think if you are a happy person and you have had a good life why not talk about those things which are cheerful and optimistic.”

He had a point. And perhaps unintentionally, an excellent argument for turning what has become a clichéd mockery of introspection on its philosophically pretentious head: When did the ultimate life question of “What is ‘truth’?” get replaced with the grim answer “We still have absolutely no idea but whatever it is it’s definitely, horribly, miserably, bad.” And when did we start buying into it? So much so that a film of such unapologetic positive proportions is a bad thing?

By definition, optimism calls for “faith in a goodness that pervades reality.” It is a commitment to a perspective within a negative setting. With it comes a sort of innocence, a notion of ‘rose colored glasses”, a sunnier-than-we-remember-it-being way of approaching things. Most of us have been reconditioned to take this as a sure sign of stupidity; a base, simplistic approach to dealing with the “realities” of the world. I take it as a happy revelation.

Pirate Radio is that happy revelation. And one we must dare ourselves to partake in. Dare to happily worship the sounds that “rocked a nation and a decade”, dare to laugh loudly at the raunchy jokes, sexual antics, and screwball scenarios, and dare to be swept away for even just 1 hour and 56 minutes in pure optimism. Right now it’s one of the bravest things we can do.

Pirate Radio is in theaters.