Pretty on the Outside 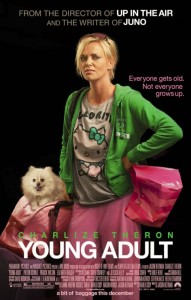 “Young Adult” feels like revenge, sweet revenge against the popular kids who grew up to be losers and spend their time wallowing in former glories and wondering why the rest of the world doesn’t understand that they are awesome.

Meet Mavis Gary (Charlize Theron). She writes “YA literature” (young adult novels) about catty school girls who relish their popularity, wallow in shallow pursuits, and thrive on gushy romantic foolishness. In short, she writes about herself. Problem is, she’s pushing 40. Mavis is very proud of her success as a novelist – though in truth she’s only the ghost writer of a formerly-successful series that is now being discontinued. Think “Sweet Valley High” for total bitches.

Early on we’re given glimpses into her life which involve lots of alcohol, meaningless sex, a very unkempt apartment, and lonely days of writing insipid dreck for an impatient editor. When she meets a friend for lunch, it’s at McDonalds (hardly fabulous) and the topic of discussion is her high school sweetheart’s recent email announcing the birth of his child. She carries on a lot about how lucky she is to have “gotten out” and how sorry she feels for the folks back home.

Pretty soon, she packs her bags and heads home to win over said high school sweetheart (Patrick Wilson), despite his wife and new born baby. Once in town, she heads directly to a bar in order to torture her liver as much as possible. She meets Matt Freehauf, a chubby nerd she went to school with but knew only as “The Hate Crime Guy” due to a gay-bashing incident that rendered him crippled for life (never mind the fact that he isn’t gay.) Matt is played by Patton Oswalt in a performance that almost saves the film. He sees right through Mavis and isn’t shy about telling her so. His dry, comic disdain for Mavis infuses their scenes together with a weird chemistry. For some reason, perhaps boredom and curiosity, he allows himself to be dragged in to her shenanigans. They have one thing in common: their lives have been crippled by the past, but in very different ways.

The film unfolds just as one might expect. Mavis is a train-wreck… a really pretty one… but a wreck none the less. Watching her desperately throw herself at a happily married man (in private and public) makes for some awkward humor and unforgettably cringe-worthy scenes. We’re not meant to like her. We’re not meant to root for her. In fact, it’s not entirely clear what is being asked of the audience. For most of the film, it seems as if we’re meant to root for her comeuppance, but in the big climactic (predictable) public meltdown, a contrived backstory is suddenly thrown into the mix that’s supposed to make us feel sorry for Mavis, or at least understand her better. It feels like the bets were hedged here, as if a studio executive marched over to the set and declared, “Make her more accessible!” Honestly, it was more fun just disliking her, and the contrivance (which I won’t give away) leads me to a problem I have with Jason Reitman.

Mr. Reitman is a fine and celebrated director, and like most of the best film directors, recurring themes emerge in his work. He often takes sardonic characters and puts them through paces that force them to realize the value of family (“Thank You for Smoking”, “Up in the Air”, “Juno”, and now “Young Adult”). That’s fine. Who doesn’t believe in family? The problem is that beneath the more obvious theme in these films is something a bit more sinister at work, i.e., those without family are less-than.

In “Juno”, Jason Bateman goes off to be a “cool guy” in the city with his loft and his wanna-be rock and roll while his wife becomes a good and substantial person who adopts a baby. The person who isn’t ready for or doesn’t want children is the bad guy in the film. In “Up in the Air,” the film concludes that the poor saps down below who come home to their families every day have full and fulfilling lives, while the single man ‘up in the air’ who is dedicated to his career lives an empty and meaningless life. In “Young Adult” we find out a secret about Mavis and what’s behind her disdain for family, indicating once again that people without children are miserable, lonely, losers.

I think this is an unintended theme in Mr. Reitman’s work. His intent is to take a sour subject and infuse it with something sweet – and the catch-all of “family” seems to be his go-to for “something sweet.” As one who can hardly tolerate saccharine moments in films, I get what he’s up to and I appreciate it. Getting us there without making us puke first has kind of become his niche. He’s good at it, and I like what he does. Except for the unintentional suggestion that childless adults might as well be taken out back and shot for all the good they can offer society and themselves.

“Young Adult” was written by Diablo Cody, a screenwriter who has a polarizing effect on those who follow behind-the-scenes types. She has fan boys, fan girls, and straight-up haters. It seems folks are upset that “Juno” won the Oscar for best screenplay given the fact that the dialogue was highly stylized and far from naturalistic. I kinda dug it, personally. But that’s just me. If directors and actors can infuse their work with a signature style, why not writers as well? Woody Allen’s been doing it for decades. Whether the meta-industry bickering over “Juno” is the cause or not, this time she keeps it real. The dialogue in “Young Adult” is snappy with retorts but not so self-aware that it sounds overly written. But, haters probably gonna hate anyway. Do your thing, girl.

The re-teaming of Reitman and Cody was much anticipated, but I don’t think “Young Adult” is the movie everyone was hoping for. It’s bold in its non-fuzziness, something different and challenging for Ms. Theron, and a triumph for Mr. Oswalt. It just isn’t all that much fun for the audience.

The Devil and Paramount Pictures
Next