Proud To Be A Trekkie 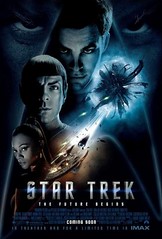 You gotta love a movie that within the first 10 minutes makes you feel excitement, anticipation, and sadness. And let me tell you it just kept getting better after that.

I was about as excited as a little girl with a new puppy when the movie started to introduce all of my old faves. Each actor portrayed their character with respect and loyalty without becoming annoying copycats. It was wonderful to see the relationships begin between these iconic characters but even better when you heard McCoy or Scottie say their famous lines that have become an important part of pop culture. A much older but still fantastic Leonard Nemoy even has a role in the film to really tie together the old with the new.

Chris Pine portrays James T. Kirk in a way that makes you feel comfortable that he is taking over the helm of the Starship Enterprise. He’s got the arrogance and ladies man attitude that even Shatner would be proud of. Zachary Quinto as Spock shows a more human side to this character. And who would have thought the pot head from Harold & Kumar (John Cho) could pull off Sulu?! The rest of the cast including Eric Bana, Zoe Saldana, Simon Pegg, and Anton Yelchin accent the young Kirk but the best performance in my opinion is from Karl Urban who portrays Leonard “Bones” McCoy. He really captures the perfect mix of sarcasm and loyalty that made us love DeForest Kelly.

This is definitely a must see at the theater. Star Trek has some good action with sincere emotions as well as some excellent humor courtesy of this new cast of old beloved characters. And we finally get to see what happened with that ol’ Kobayashi Maru test.