Rage Beyond the Grave 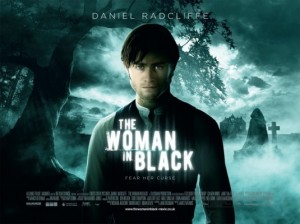 “The Woman in Black” succeeds in part, but doesn’t quite live up to the scares promised in the trailer.

Daniel Radcliffe plays Arthur Kipps, a widower whose wife died while giving birth to their adorable son. He’s given the impossible task of settling the affairs at Eel Marsh, an aptly named spooky manor that is inexplicably located so far into the marshes that it’s only available by horse or motor carriage when the tide goes out. When the tide is in, the only road to the home is underwater, which of course leaves any inhabitants stranded until the tide goes out again. While the lonely mansion afloat in the marsh makes for an effective and creepy visual and serves a contrivance in the plot (one can’t merely decide to leave when the going gets spooky), it defies logic. Who would build a home that far beyond the tide? Who would live there? And how could the home ever be sold (even if it wasn’t ghost-ridden?)

Needless to say, this isn’t a job anyone would want, but Kipps is given little choice and his son depends on him.

When he arrives in town, the requisite mysterious and unfriendly reception he receives by the locals lets us know that something isn’t quite right at ol’ Eel Marsh. But determined he is, and off he goes.

The charm of the film is its old-fashioned approach to gothic horror. Kipps’ experiences in the manor remind one of an amusement park spook-house, with creaks and bumps beckoning him to investigate by candlelight so we can be subjected to those “gotcha” moments when something appears just behind the protagonist in the dark, or a mechanical doll suddenly goes to clanging and banging on its own, etc.

But these jolts lose their punch as they begin to come one after another for a stretch of the film that feels overly long, and the pacing begins to lag. Another problem is that there seems to be a “kitchen-sink” approach as far as tried-and-true methods of delivering chills: an isolated manor, creepy kids, creepy dolls (lots and lots of them!), rocking chairs that move on their own, a face in the upstairs window. You name it, they’ve used the lot.

The mystery that unfolds is a solid enough ghost story, as these things go, and it has the added benefit of tying thematically with the protagonist’s personal journey. It’s this aspect of the film that gives the ending a surprising punch of emotional resonance.

A cast of seasoned character actors (Janet McTeer, Ciaran Hinds) make a strong impression, but it’s really Radcliffe’s vehicle and he handles it very well. In fact, it’s fair to say his performance gives the film much more weight than it probably deserves. He’s a good actor, playing a role a bit beyond his age, and making it work. Here’s hoping he continues to choose well, and enjoys a long career beyond the Potter series.

In all, “The Woman in Black” is a solid rendering of a lot of things we’ve seen before with strong performances to make it worth your while. If you’re in the mood for a spooky house movie, this is just the ticket.

A Whale of a Tale
Next