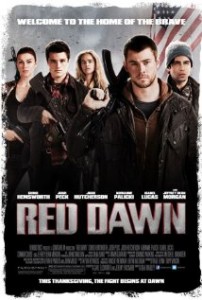 WHY DID THEY REMAKE THIS?
Ok, so the original is no masterpiece. I know that.  It hit when I was about 9 years old. There is a sense of nostalgia. It was just right on with what my stepbrother and I would act out. The old ” WHAT WOULD YOU DO?” scenerio played well for us at the tail end of the cold war. The actors were well known also. The remake, has only one recognizable dude. Well, I’ll be honest, I didn’t recognize him, I  was told the “THOR” guy was in the Swayze role. Chris Hemsworth did an ok job with what he was given. How can you replace Patrick Swayze?    In the original, you felt consequence . The characters, though cheesy were relate-able. You cared when each died at least a little. The new one is crap. I kept waiting for the payoff of death for these terrible actors, but that never came. No, this movie is about a hostile take-over where nobody really dies. It was like a cable movie on lifetime or the family channel. Even better, it was like an after school special. Ok, I’ll draw you a picture of what it was like to watch this; in”A CLOCKWORK ORANGE” when the patient is strapped down with his  eyes held forcibly open, this remake could be showing. That’s how I felt anyway. Miserable. Avoid this film. Everything the original had going for it has been stripped.
PLEASE STOP WITH THE REMAKES, GIVE US SOMETHING CREATIVE..

"THE GREY": A DVD TO THINK ABOUT BEFORE WATCHING .
Next